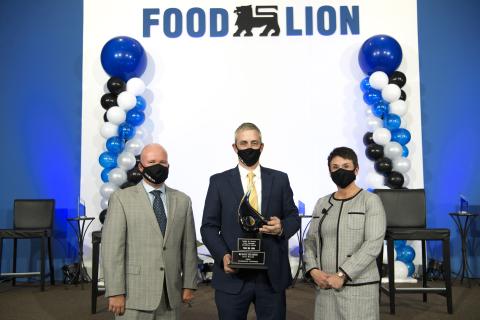 Reggie Beamon, store manager of the Food Lion at 851 Washington Square Mall in Washington, North Carolina, is  Food Lion’s 2020 Ralph W. Ketner Store Manager of the Year. Beamon was chosen from a group of more than 1,000 store managers across the banner’s 10-state market area.

“I made a commitment a long time ago that no matter what role I have, customers would get the very best I have to offer,” noted Beamon on accepting the award. “I couldn’t have received this honor without wonderful people supporting me, and I can’t thank them enough.”

“We’re in unprecedented times, and our store managers know their neighbors in the towns and cities they serve are counting on them more than ever,” added Food Lion President Meg Ham. “Our store managers are committed to their customers, associates and communities. They work tirelessly to lead their associates with care and compassion and ensure our customers have everything they need to nourish their families and set them up for success in life. I am extremely proud to recognize this group of leaders and thank them for everything they do every day.”

Beamon began his grocery career more than a quarter-century ago as a bagger, rising through the ranks until attaining his present position. As well as providing a consistently clean, fresh, in-stock, and well-run grocery store every day, Beamon serves the local community. Last year, he teamed with Eagle’s Wings, a local feeding agency, to aid needy neighbors.

In addition to Beamon’s recognition, four other store managers were honored for their leadership with 2020 Divisional Store Manager Excellence Awards:

Salisbury, North Carolina-basedFood Lionhas more than 1,000 stores in 10 Southeastern and Mid-Atlantic states and employs more than 68,000 associates. Its parent company, Ahold Delhaize USA, a division of Zaandam, Netherlands-based Ahold Delhaize operating more than 2,000 stores across 23 states, is No. 11 on The PG 100,Progressive Grocer’s 2020 list of the top food and consumables retailers in North America.