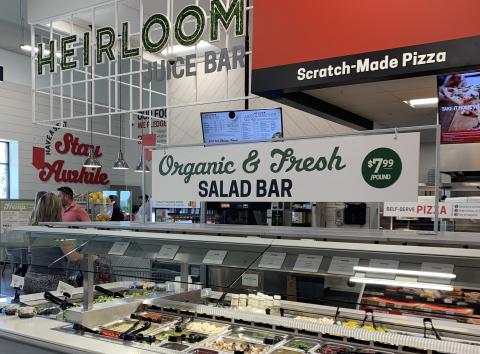 Asheville, N.C.-based Earth Fare has a footprint of about 50 stores.

Earth Fare announced Monday that it will close all of its stores and begin inventory liquidation immediately, becoming the third U.S. grocer in recent weeks to seek a sale or shut down.

Inventory liquidation at all Earth Fare stores will begin today, the company announced in a press release. Corporate offices are also closing with the company working to sell its remaining assets.

"Earth Fare has been proud to serve the natural and organic grocery market, and the decision to begin the process of closing our stores was not entered into lightly. We'd like to thank our team members for their commitment and dedication to serving our customers, and our vendors and suppliers for their partnership," the company said in a statement.

Earth Fare operates about 50 stores. The chain says all employees have been notified of the impending closure of the company's stores and corporate office. During this time, the company says it will continue to pursue a sale of assets, in whole or in parts.

At a time when the food retail industry is crowded with everyone from Amazon to dollar stores selling natural foods, Earth Fare had positioned itself as a grocer aiming to raise food industry standards. Earth Fare sells foods and products that the company says are free of hormones, antibiotics, preservatives and artificial ingredients. The grocery chain boasts more than 4,000 non-GMO items storewide, with more than 1,000 gluten-free products and a wide assortment to meet other dietary needs as well. Over the course of the past few years, the company had also implemented numerous strategic initiatives aimed at growth and expansion and enhancing the customer experience.

"While many of these initiatives improved the business, continued challenges in the retail industry impeded the company's progress as well as its ability to refinance its debt.  As a result, Earth Fare is not in a financial position to continue to operate on a go-forward basis. As such, we have made the difficult, but necessary decision to commence inventory liquidation sales while we continue to engage in a process to find potential suitors for our stores," the company said.

Fairway has entered into agreements with buyers for up to five of its 14 stores, and says it will look for buyers for its other locations, which are in the New York area.

Meanwhile Lucky's Market has entered into an asset purchase agreement with a group led by company founders Bo and Trish Sharon for the seven locations (out of a footprint of 39 stores) that will continue to operate under the banner.