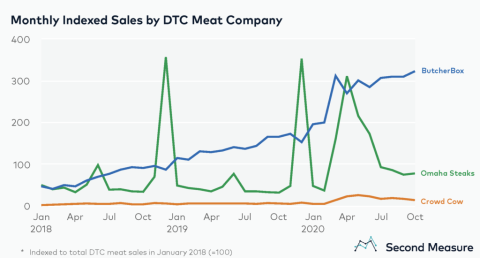 Direct-to-consumer meat suppliers appear to be among the pandemic winners in 2020, according to a new report from Second Measure, a San Mateo, California-based provider of retail analytics.

According to Second Measure editorial marketer Janine Perri, the meat shortages in the early days of the pandemic led many Americans to turn to DTC meat companies. “Spending trends during the pandemic suggest that instead of viewing DTC meat as a one-off holiday gift, consumers now see it as a necessary service like meal kits and grocery delivery,” Perri wrote in a blog post.

The Second Measure research found that ButcherBox, Omaha Steaks and Crowd Cow are among the top DTC meat providers going into the new year.

“Omaha Steaks has long been known as a retailer of meat and food gifts, and most of its annual sales occur in December. Newcomers ButcherBox and Crowd Cow were founded in 2015 as meat subscription boxes and are generally less affected by seasonality,” Perri wrote.

She explained that sales for all three companies have grown significantly since pandemic lockdowns began, but that one company continues to stand out.

“ButcherBox’s sales spiked more than 50% month over month in March,” she wrote in the blog. “Omaha Steaks and Crowd Cow respectively saw 68% and 95% month-over-month sales increases in April. However, only ButcherBox sales have continued rising in the months following the initial spike.”

Even so, according to Perri, “in March, Omaha Steaks experienced almost 300% year-over-year growth, compared to 138% for Butcherbox and 134% for Crowd Cow. By April, Omaha Steaks’ growth reached nearly 800%.”

More specifically, Second Measure found, both Omaha Steaks and Crowd Cow have gained a surge in new customers earlier this year as the pandemic began to rage.

According to Second Measure, ButcherBox has earned a good mark in the work of DTC meat sales.

"ButcherBox is the clear winner when it comes to customer retention,” Perri wrote. “Among consumers who made their first ButcherBox purchase in March 2020, 41% made another purchase six months later. By contrast, Crowd Cow retained 11% of customers six months after an initial purchase in March. Omaha Steaks only retained 5%. Omaha Steaks has the lowest retention in this competitive set likely because it is the only company without a subscription business model.”