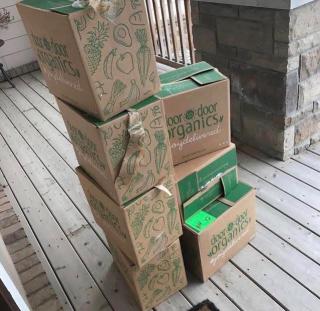 Ecommerce grocer Door to Door Organics, which delivered natural and organic foods to 63 markets in 18 states and Washington, D.C., has abruptly shuttered its business.

The news comes at a time when the service was planning to expand. Although no exact reason was given as to why the company shut down suddenly today, it did state on its website that “ultimately, timing of recent events in our industry and the impact that had on our funding prospects were not in our favor, with the ultimate result being no path forward.”

"This comment raises questions about what this means for other, privately-held providers who are dependent on this type of funding to invest in growth as profitability remains elusive for many," David Bishop, partner with Barrington, Ill.-based retail consultancy Brick Meets Click, told Progressive Grocer.

Beginning as a produce-box delivery service operating out of a garage in Bucks County, Pa., the service grew to make nearly 3 million deliveries of organic produce and natural groceries while supporting local farmers and vendors and striving to impact communities in a positive manner.

"In 2012, we became the first grocer in Colorado to become a certified B-Corp by meeting rigorous standards of social, environmental and corporate responsibility,” the retailer said on its website. “Since the beginning, supporting local community partners has been a part of the fabric of our company. "This year, we were on pace to donate more than 600,000 pounds of organic and natural food to food banks in our communities.”

Door to Door merged with Relay Foods in June 2016 to ultimately reach its size during the period before its closure.

In the months leading up to its sudden end, Door to Door brought in several new members to its c-suite. In June, the Louisville, Colo.-based grocer named Mike Demko, an ecommerce and tech veteran who had served at such companies as FreshDirect and Priceline, its CEO. He succeeded interim CEO Stefan Pepe, who became chairman.

"Over the last 20 years, Door to Door Organics has built a large, loyal customer base by sticking to its core values of delivering fresh, natural and organic food, powered by topnotch customer service and innovative technology,” he said when he joined. “As the online grocery industry continues to evolve, I look forward to leading the company through a new era of growth as we double-down on these values and capitalize on new opportunities."

Additionally, the company named Peapod veteran Scott DeGraeve its COO less than a month ago, with the intent of him providing strategic operational oversight to help scale the business and build on the company’s "tremendous growth trajectory in recent years."

The news of Door to Door’s closure underscores the significant challenges facing pure-play operators in the ecommerce space that are trying to profitably compete for share of fresh foods, Bishop noted.

"Unfortunately, they won't be the last, as it's clear that other companies – like Blue Apron – are wrestling with their own issues," he said.

While much talk has been made of Amazon’s foray into grocery and other pure ecommerce operations such as meal kit operators threatening the brick-and-mortar space, this news actually can be seen as beacon of hope for grocers operating physical stores, Bishop suggested.