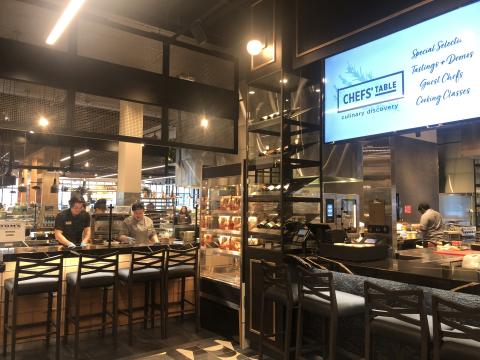 Putting the "kitchen" in Dom's Kitchen & Market is new culinary partner Brendan Sodikoff, the founder of more than a dozen Chicago restaurant brands.

As Dom's Kitchen & Market nears the one-year mark of its entry into Chicago’s retail landscape, it continues to expand its offerings and team of grocery and culinary experts.

“Brendan is a natural fit for our expanding team. He has a unique way of creating a fully rounded customer experience and I look forward to him joining the team,” said Co-CEO Mariano.

Added Co-CEO Don Fitzgerald: “We believe that Sodikoff is a perfect addition to our existing culinary team as we continue to expand the Dom’s brand and amplify our desire to provide the best hospitality experience for our customers.”

Sodikoff said he is looking forward to providing Chicago patrons with a unique shopping and dining experience. “I was attracted to Dom’s because of our similar hospitality-focused philosophies of building community and high-quality guest and food experiences. I am excited to collaborate with Dom’s and establish them alongside Chicago’s most iconic food-experience brands,” he remarked.

By enlisting Sodikoff, Dom’s will enhance its food offerings and menu development as it works towards scaling to 15 stores by 2025. A second location is set to open this fall in Chicago’s Old Town neighborhood.

Dom’s already has a sizeable foodservice-at-retail element. The first location in Lincoln Park at 2730 N Halsted Street is set up with several walk-up counters where shoppers can order meals to go or to eat in sit-down areas inside and outside the store.

In addition to growing its physical store footprint and widening its menu, Dom’s is also providing more omnichannel options to customers. The market, which offers a Dom’s Go e-commerce site, recently announced it is also adding Instacart service to customers in the area.

Dom’s Kitchen & Market is led by Mariano, who founded Mariano’s after serving as the CEO of Roundy’s and Dominick’s; Fitzgerald, a former senior executive at Dominick’s, Roundy’s, and Mariano’s; and Jay Owen of Dom Capital Group, a venture investor in food technology and next-generation commerce.