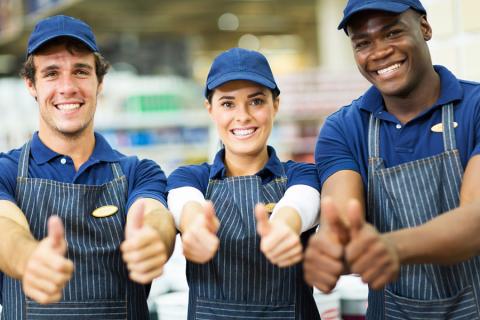 Add Dollar General to the list of food retailers that are boosting bonuses for workers during the COVID-19 pandemic.

The retail chain said it will spend $25 million on “retail, distribution center and fleet employee bonuses to demonstrate continued appreciation for the exceptional efforts of employees to serve customers and fulfill the company’s mission of serving others during the company’s first quarter 2020.” Dollar General said it has now committed to spending about $60 million on what it called “employee appreciation bonuses.

The bonuses apply to all full- and part-time employees across its store, distribution center and private fleet networks employed as of May 1, 2020, and is in addition to the $35 million investment announced on March 24, 2020.

The pandemic has led to increased labor demands among food retailers as they serve anxious, socially distancing shoppers while also striving to retain and protect workers as those essential businesses remain open. As well, many food retailers and the United Food and Commercial Workers International Union (UFCW), the largest food and retail union in the United States, have issued calls to treat grocery workers as first responders. Meanwhile, public pressure in favor of paying food retail workers more during this pandemic has built, and at least one major local government – hard-hit New York City – is considering “hazard” pay for those employees.

Such a measure would certainly present new financial difficulties to many grocers, especially smaller, independent operations. But finding enough workers to staff stores during this ongoing crisis continues to vex retailers. Like its competitors, Dollar General has cast a wider hiring net over the last six to eight weeks, even encouraging laid-off restaurant and hotel workers to apply for jobs with the chain. The Kroger Co., Amazon, Walmart and Target are among the other major food retailers that have also stepped up hiring efforts during the pandemic.

And those other retailers are also handing out their own employee bonuses. Walmart, for example, has paid out some $180 million in cash rewards to hourly workers, and has hired at least 200,000 workers to help it carry the retail and fulfillment load during the pandemic. Kroger, for its part, distributed what it called a “hero bonus” to hourly fron-tline grocery, supply chain, manufacturing, pharmacy and call center associates.

Before the pandemic hit and shopping habits began to shift as a result, Dollar General was in the midst of a growth spurt, which also served to increase its needs for labor. In fiscal 2019, the retail chain opened 975 new stores. With food retailers still operating on the frontlines of the pandemic even as some economies slowly reopen, it’s likely that the wave of industry bonuses has yet to play itself out.