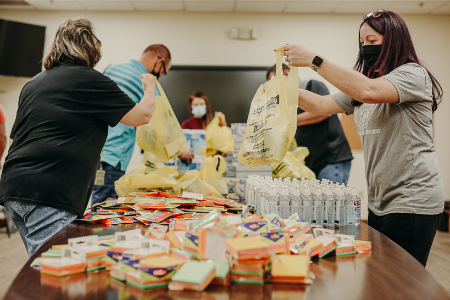 Dollar General (DG) is commemorating the 20th anniversary of its Zanesville, Ohio, distribution center by donating approximately $77,000 to area schools.

DG surprised three local Zanesville elementary school principals with $20,000 each to support ongoing literacy and education initiatives. The funds are in addition to the nearly $17,000 in school supplies to support students and teachers as they head back to the classroom for in-person learning. More than 1,600 students and 115 teachers will benefit from the donations at Zane Grey Elementary, John McIntire Elementary and National Road Elementary schools.

The Zanesville Distribution Center currently employs approximately 1,100 team members with nearly 10% of those having been employed with DG since the facility’s opening in 2001. Today, DG operates traditional distribution operations, as well as the recently added DG Fresh and DG Private Fleet functionalities in Zanesville.

In addition to the contributions, the Dollar General Literacy Foundation has invested more than $1.6 million in the Zanesville community to date. The foundation has partnered with Zanesville City Schools, as well as programs in the community including ForeverDads, Mid-East Tech and Muskingum County Library.

"Our mission at Dollar General is Serving Others, and our employees love giving back to the community that we proudly call home,” said DG's Zanesville Distribution Center Director Brian Braglin. “We have been fortunate to be able to support Zanesville through many initiatives including Relay for Life, being recognized as the top donating company in the county for more than five years straight, the Salvation Army, and Habitat for Humanity. We are proud to be a company that the Zanesville community knows they can call on for help.”

In 2020, DG’s Zanesville Distribution Center also donated $10,000 to the Muskingum County Hunger Network, $5,000 to United Way, $2,000 to the Salvation Army and contributed product donations to local food pantries and the animal shelter.

Zanesville Chamber of Commerce President Dana Matz shared that DG, which is the second largest employer in Muskingum County, demonstrates graciousness on both local and national levels through donations.

“Since discussions began on Dollar General locating in our community, they have been true to their word, and they are genuine in their actions. Dollar General has a significant impact on our community simply by the number of people they employ, as well as in how they improve the quality of life, not only of those families they employ but also other families in our community,” Matz said. “Locally, they provide products that benefit schools and to those in need within the community. Nationally, the Dollar General Literacy Foundation is very gracious in providing money to improve literacy in Zanesville and Muskingum County.”

Matz added that the Zanesville Distribution Center has received an ACES Award (Awards for Community and Economic Success) presented by the Chamber of Commerce and Muskingum Growth Partners five times, mostly recently in 2020 and 2021.

DG's 2021 plans for expansion include opening 1,050 stores, remodeling 1,750 locations and relocating 100. The retailer is currently constructing a first-of-its-kind dual-purpose distribution center measuring 800,000-square-feet in eastern Nebraska that will handle general merchandise and provide another location for the expanding DG Fresh distribution network.

“We prioritize employee growth and development because it allows us to live our mission of serving others in the communities we call home and bring to action our fourth operating priority of ‘Investing in Our Diverse Teams through Development, Empowerment and Inclusion,’” said Todd Vasos, Dollar General CEO.

Goodlettsville, Tennessee-based Dollar General operates more than 17,000 stores in 46 states, employing approximately 140,000 associates. The company is No. 16 on The PG 100, Progressive Grocer’s 2020 list of the top food and consumables retailers in North America.