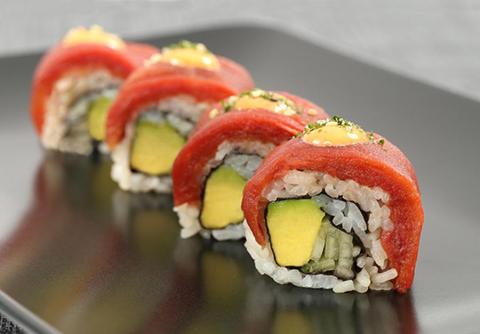 Sushi made with Ocean Hugger's Ahimi plant-based tuna alternative, which is available at Whole Foods Market

How do specialty food startups go from concept to shelf so quickly, often in an astoundingly short two-month period? And what can big food companies learn from them? In this series on the tectonic shifts taking place in food, Specialty Food Association president Phil Kafarakis will take us through the three key phases of development, from the aha! moment, to development and financing, as executed by startup enterprises. This first article will explore the question of concept, and how an entrepreneur takes it from there to forming a business.

Coming from a background in Big Food, I have watched the specialty food industry — representing 16 percent of the overall market, with more than $140 billion in total sales, $2.2 billion of that online — move from being a small but persistent disruptor to what it is today: a generator of startup solutions. There’s a great deal of movement in the sector; it has its finger on the pulse of consumers and isn’t afraid to start small and be disruptive. While it’s harder for Big Food companies to operate this way, there’s a lot that can be learned from their smaller counterparts.

Specialty food is an industry that often succeeds through implementing a “crazy idea.” Business starts with a determined dreamer, and then takes off to displace a food industry standard and put something new and vital in its place. And there’s “new and vital” popping up everywhere!

There are social issues growing around food, too: Consider that in the United States alone, we throw out 1.3 billion tons of food a year, wasting about a third of what’s produced, yet by 2030, the global demand for food will go up by 35 percent. Within specialty food, folks are looking at all of this and coming up with solutions.

It seems clear that now is the time for new ideas and for turning disruption into viable business. I recently had the good fortune to lead a roundtable on industry disruption that featured three young leaders of emerging startups: David Benzaquen, CEO of Ocean Hugger Foods; Priya Mittal, founder of GroGreen Tech; and Alvyn Severien, co-founder and CEO of Algama Foods. I asked them to weigh in on how they developed their concepts, and how they went from concept to business. Not surprisingly, they all started from a place of passionately held social values.

What Do Tuna and Tomatoes Have In Common? Umami

Benzaquen teamed up with chef David Cornwell because they didn’t like what’s happening to the planet’s fish. They made a visit to the Tsukiji Fish Market, in Tokyo, where 4 million pounds of endangered tuna is auctioned off every weekday, and has been for decades. They discovered research that found by 2048, at our current rate of consumption, there will be zero commercial fish of any species left in the oceans. And they became outraged.

Putting Cornwell’s background in food science to work, they began to formulate a way to convert tomatoes into sushi-grade tuna — both tuna and tomatoes are rich in umami, known in Japan as the “fifth flavor.” The resulting product, which they call Ahimi, or “spirit of Ahi” (tuna), was their first success — which was truly confirmed when a Japanese master sushi chef of 30 years took it seriously. They’ve since developed eggplant-based Unami, to replace eel, and they’re about to launch a salmon substitute called Sakimi, which is based on carrots.

One day, teenage techie Priya Mittal was in the Union Square Farmers’ Market, in Manhattan, watching a customer examine every apple at a stand and toss aside any with the slightest blemish. Mittal knew that a lot of produce – 60 billion pounds annually — gets thrown out because it’s “ugly.” Witnessing just a small act of this wastefulness got her fired up.

She began talking to farmers and restaurateurs, and discovered that there could be a real market for “ugly produce” in smoothie/juice bars and restaurants (think soups and sauces) in New York City. Mittal used her coding skills to develop an app that creates a digital trade and delivery platform, allowing for wasted food to become wanted food. She set out to revolutionize communication between farmers and end-users, arranging for produce pickups and deliveries to restaurants, and offering a 20 percent discount from market rate.

Algae: From Yuck to Yum

French foodie Alvyn Severien became deeply interested in the idea of taking humble seaweed, which is a proven superfood, and rendering it not just edible, but also delicious. He saw how sustainable spirulina is, not to mention its nutritional value – it contains beneficial vitamins, minerals and high levels of protein.

Initially, Severien and his team tried to develop smoothies with spirulina, but the end product was always unpalatable. It didn’t require much to know that not only did their product need to be affordable, but, to truly succeed, it also needed to be delicious.

Algama, the company that Severien co-founded, spent four years doing research and development to unlock the potential of spirulina algae. Its first winner, a product named Good Food, is actually a vegan mayo made without eggs, preservatives, GMOs, salt  or gluten — and the product squares with Severien’s belief that it’s our responsibility to make products healthier and more sustainable.

That’s just a brief look at a tiny tip of the iceberg of some of the new ideas in food. Next time, we’ll talk about how these types of new businesses — and the great concepts underpinning them — scale up.