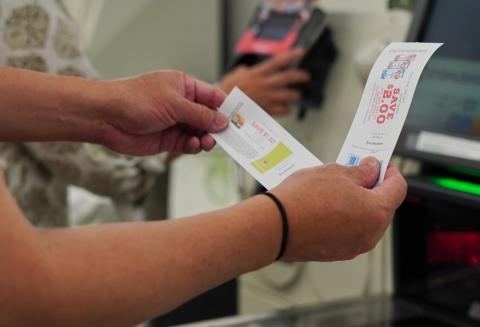 The Virginia Beach, Va., woman was also ordered to pay more than $31 million in restitution jointly with her husband, Pacifico Talens.

According to court documents, from approximately April 2017 through May 2020, 41-year-old Lori Ann Talens operated a complex scheme using social media sites and apps such as Facebook and Telegram to find groups of coupon enthusiasts and sell them counterfeit coupons. Lori Ann Talens, who operated online under the moniker “MasterChef,” used a computer to design, create and produce a wide variety of counterfeit coupons in her Virginia Beach home. These counterfeit coupons were virtually indistinguishable from authentic coupons and were often created with inflated values, far in excess of what an authentic coupon would offer, to receive free or deeply discounted items at retail.

Aware of the coupon scheme, Pacifico Talens profited by and assisted in his wife's operation by shipping packages of counterfeit coupons and performing other administrative tasks.

“This massive counterfeit coupon scheme harmed consumers, retailers and manufacturers nationwide, and the economy at large,” said Raj Parekh, acting U.S. attorney for the Eastern District of Virginia (EDVA). “The sentences imposed in this case illustrate the serious consequences that criminals can face in EDVA for carrying out these sham get-rich-quick schemes.”

“Protecting American consumers and businesses from individuals who seek to take advantage of the U.S. Mail by distributing counterfeit, illegal and improper items remains a priority to postal inspectors,” remarked Inspector in Charge Daniel A. Adame, of the Washington division of the U.S. Postal Inspection Service. “We will continue to pursue these individuals to bring them to justice. We are committed to safeguarding the public’s trust in our nation’s mail system.”

“Coupon fraud is not a harmless crime. Lori Ann Talens and her husband operated an audacious fraud scheme that stole more than $31 million directly from retailers and manufacturers,” pointed out Brian Dugan, special agent in charge of the FBI’s Norfolk, Va., field office. “The FBI investigates these matters aggressively because this kind of fraud ripples through the economy, and unfortunately it is the innocent consumer that ultimately pays the price.”

Consumers can protect themselves by simply not paying money for coupons, which, when offered for sale, are often counterfeits or stolen.

TheCoupon Information Corp.'s (CIC) app, The CIC Suspect Coupon Checker, is available free of charge to retailers, law enforcement and CIC members. Counterfeit coupons known to the CIC can be identified in a few seconds. Suspect coupons can also be reported for review.

Lori Ann Talens’ lengthy sentence will be served concurrently with her sentences for other federal offenses, including Medicaid and SNAP fraud.