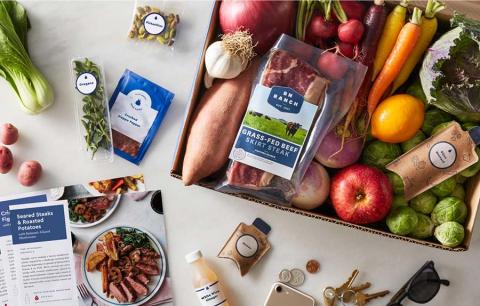 Meal-kit providers face the challenge of holding onto pandemic gains after the outbreak eases.

Average revenue per customers increased 25% in Q2 compared with the same period a year ago, reaching $331 million. Orders per customer grew by 17%, to 5.4, while average order value increased 5% to $61. Blue Apron said that it gained about 20,000 customers in the second quarter of 2020.

“Blue Apron’s strong second-quarter 2020 operating results reflect quarterly sequential and year-over-year double-digit net revenue growth and marked our return to top-line growth sooner than expected. We also expect to see year-over-year net revenue growth in the second half of 2020,” said Linda Findley Kozlowski, Blue Apron’s CEO. “Our progress with our strategic growth plan, together with the increase in demand we saw from the COVID-19 pandemic, resulted in solid and continued year-over-year growth in key customer metrics.”

In the early days of the pandemic, meal-kit services such as Blue Apron got a boost because consumers couldn't go to restaurants, and many grocers struggled to meet demand. Blue Apron said that it started to see increased demand for its meal kits at the end of March. The company reported that it added 25,000 new subscribers in the first quarter.

This latest financial report signals that the consumer habits formed early in the pandemic continue to provide fuel to meal-kit providers. Even so, the challenge for Blue Apron and other meal-kit providers will be hanging on to all of that pandemic-related demand after the pandemic is over. Meal-kit services have historically suffered from low retention rates. Fewer than 10% of new users in the United States are still around in two years, based on estimates from analytics company Second Measure.

For the second quarter, Blue Apron also reported that: