As part of Big Y Foods Inc.’s commitment to phase out single-use plastic bags at all of its checkouts, the New England grocer’s Table & Vine Fine Wines and Liquors location, in the company’s hometown of Springfield, Mass., will be the second division in eliminate them as of July 1.

Big Y has been complying with single-use plastic bag bans in several of its local communities in Massachusetts since 2014 and is gearing up for several expected to take effect this summer. The Massachusetts State Legislature has even considered a statewide ban on such bags. In response to these developments, as well as positive customer feedback to the bans, the grocer pledged last January to eliminate all single-use plastic bags at its checkouts by 2020.

“Congratulations to our Table & Vine division for joining our quest to eliminate single-use plastic bags in their store,” said Richard D. Bossie, Big Y’s SVP of operations and customer experience. “We are impressed with their planning and coordination, allowing for a speedy transition to more environmentally friendly solutions just in time for the 4th of July.”

The retailer currently uses 100 million plastic bags and 3.5 million paper bags at its checkouts each year. It collects single-use plastic bags from customers at each store and sends them to recycling plants for use in decking. Big Y’s other sustainability efforts include frequent donations to area food banks, participation in paper- and cardboard-recycling programs and composting, and the installation of such energy-saving solutions as solar arrays, LED lighting and electric car-charging stations.

One of the largest independently owned supermarket chains in New England, Big Y operates in Massachusetts and Connecticut 70 supermarkets, nine Big Y Express gas and convenience locations, one Fresh Acres Market, and one Table & Vine store, with more than 11,000 employees. The company is No. 36 on Progressive Grocer’s 2019 Super 50 list of the top grocers in the United States. 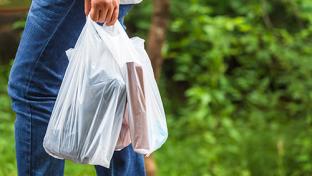