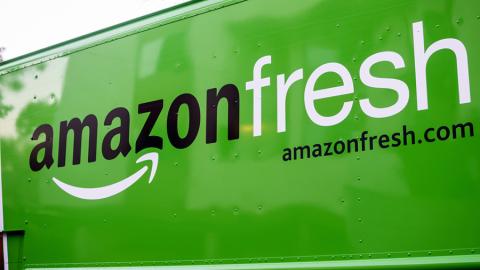 Grocery and other forms of retail delivery, of course, promise to be important factors in the holiday shopping season.

Amazon is working on a fix for a problem that challenged food retailers earlier in the pandemic — long virtual lines for grocery delivery spots for online shoppers.

According to an interview that Stephanie Landry, Amazon’s VP of grocery, gave to Recode, “Amazon has now come up with a solution if there are large spikes in demand this fall and winter, whether because of a jump in COVID-19 cases, a surge in other illnesses (like the flu), or bad weather.”

As Landry told it, in the event that a shopper can't secure a preferred delivery time when placing an order, that customer will receive a notice when a spot becomes available. The technology reportedly will apply to orders placed with Amazon Fresh or Whole Foods.

The feature, according to Recode, amounts to enabling customers “to reserve a virtual place in line when there is no immediate availability over the next few days. Once a shopper signs up, they are given an estimate for when delivery availability will open up, and, when it does, the company notifies them and gives them two hours to place their order.”

Further comment from Amazon wasn't immediately available. The retailer reportedly is testing the technology in the United Kingdom, and Landry said the feature could debut in the United States in “the coming months.”

Grocery and other forms of retail delivery, of course, promise to be important factors in the holiday shopping season.

Recent evidence of that comes from San Francisco-based Instacart, which is fresh off a $200 million funding round, further solidifying the company's position as a leader in grocery e-commerce. The investment comes as consumer demand for Instacart’s online grocery delivery and pickup services continues to grow and the company expands its marketplace with new and existing retail partners. Instacart has continued to team up with new retailers over the past year, and today the company partners with more than 500 retailers and delivers from nearly 40,000 store locations across the United States and Canada.

Additionally, Birmingham, Alabama-based grocery delivery service Shipt recently said that it would hire an additional 100,000 shoppers this holiday season amid unrelenting demand for grocery delivery from the American consumer.

No. 2 on The PG 100, Progressive Grocer’s 2020 list of the top food and consumables retailers in North America, Seattle-based Amazon is also planning new grocery stores in the Los Angeles and Philadelphia markets, according to recent media reports. Amazon-owned Whole Foods, based in Austin, Texas, is No. 24 on the list, while Minneapolis-based Target, parent company of Shipt, is No. 7.