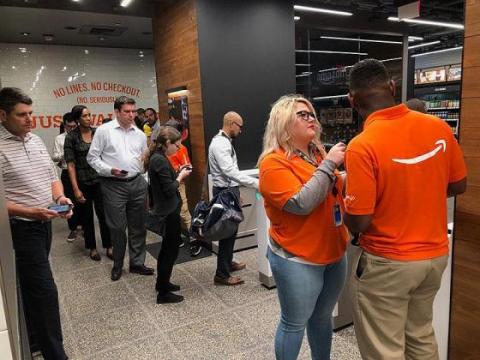 Amazon has taken a further step toward setting up its Amazon Go checkout-free convenience concept in London, Reuters has reported, citing a report from U.K. business-to-business intelligence brand The Grocer.

The Seattle-based ecommerce behemoth secured central London retail space for the concept, the news outlet noted. This development would make for the first Amazon Go location outside of the United States.

The number of sites secured is not known, Reuters said. This wouldn't be the first time Amazon sells food in the United Kingdom, however: It currently does so through its Amazon Fresh, Amazon Pantry and Prime Now delivery services.

Amazon now operates 10 Amazon Go locations, all in the United States: Four in Seattle, four in Chicago and two in San Francisco. It's planning to have 3,000 open by 2021.Progressive Grocer sister brand Shopper Marketing was able to tour the first Chicago location during its opening last summer – read the full coverage here.

In other Amazon news, the company this week pulled out of its plans to open one of two second-headquarters (HQ2) locations in New York, following local complaints. It will still move forward with its HQ2 location in Virginia, however.

Amazon has more than 575,000 employees worldwide. Under its Whole Foods Market banner, the company is No. 8 on PG’s 2018 Super 50 list of the top grocers in the United States.