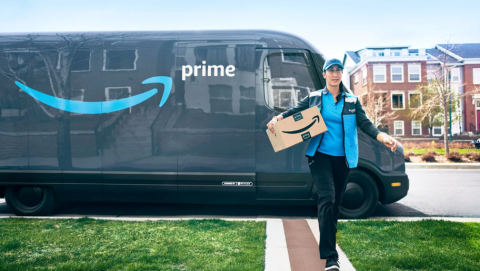 Amazon's fleet of electric delivery vehicles will be visible in more than 100 U.S. cities this holiday season.

Hundreds of Amazon’s custom electric delivery vehicles from automaker and automotive technology company Rivian hit the road over the summer, with the retailer steadily increasing its fleet over the past several months. Amazon now has more than 1,000 of these vehicles making deliveries across 100 U.S. cities, and is getting ready to mark its first holiday season with the trucks on the road.

The e-retailer has delivered more than 5 million packages via the zero-emissions vehicles since July, and customers will soon begin seeing them in such cities as Boston, Denver, Houston, Indianapolis, Las Vegas, New York City, Salt Lake City and many others.

“We’re always excited for the holiday season, but making deliveries to customers across the country with our new zero-emission vehicles for the first time makes this year unique,” said Udit Madan, VP of Amazon Transportation. “We’ve already delivered over 5 million packages with our vehicles produced by Rivian, and this is still just the beginning — that figure will grow exponentially as we continue to make progress toward our 100,000-vehicle goal.”

The growth of its electric vehicle fleet is part of Amazon’s commitment to reaching net-zero carbon by 2040 and its larger Climate Pledge. According to the company, it will eliminate millions of metric tons of carbon per year when it reaches its goal of having all of its 100,000 electric delivery vehicles on the road by 2030.

“Fleet electrification is essential to reaching the world’s zero-emissions goal,” said Jiten Behl, chief growth officer at Irvine, Calif.-based Rivian. “So, to see our ramp up in production supporting Amazon’s rollout in cities across the country is amazing. Not just for the environment, but also for our teams working hard to get tens of thousands of electric delivery vehicles on the road. They continue to be motivated by our combined mission and the great feedback about the vehicle’s performance and quality.”

Thanks to a partnership with renewable fuels technology company Infinium that was announced in September, Amazon will shift from diesel fuel to ultra-low carbon electrofuels for some of its fleets in early 2023. The move will begin with vehicles in Amazon’s middle-mile fleet in southern California, which transports orders from fulfillment centers and vendors to Amazon’s sortation and delivery stations in the region.

Amazon also signed an agreement with Plug Power to supply nearly 11,000 tons per year of green hydrogen for its transportation and building operations starting in 2025.