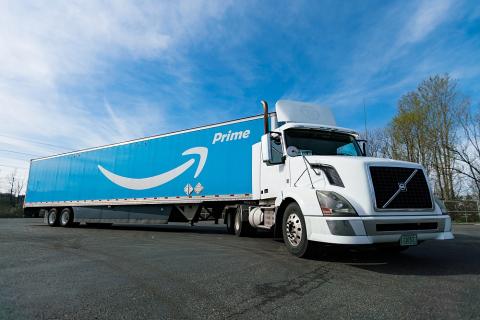 Amazon's middle fleet trucks in Southern California will soon be powered by electrofuels in lieu of diesel.

As part of its commitment to sustainability, Amazon is moving to ultra-low carbon electrofuels for some of its fleets. The retail giant announced this week that it has entered into an agreement with renewable fuels technology company Infinium to begin powering its trucks.

The switch from diesel fuel will start in early 2023 with vehicles in Amazon’s middle mile fleet in southern California. The fleet transports orders from fulfillment centers and vendors to Amazon’s sortation and delivery stations in the region.

The electrofuels, to be produced in Infinium’s facility in Texas, are made with renewable-power-generated green hydrogen and recycled carbon waste that would have otherwise been released into the atmosphere. The alternative to traditional fossil fuels can power trucks as well as marine freight and airplanes without the need for engine modifications.

“Infinium’s electrofuels can help Amazon reduce carbon emissions across our transportation fleet, which is important to both us and our customers, and will help us move closer to our goal of net-zero carbon by 2040,” said Kara Hurst, VP of worldwide sustainability at Amazon. “We’ve supported Infinium’s technology through our Climate Pledge Fund, and it’s exciting to see our investment turning into usable fuel that will help us, and others across the industry, decarbonize transportation in the long run.”

Added Infinium CEO Robert Schuetzle: “We’ve been developing this technology for the better part of a decade, and we expect our electrofuels to reduce greenhouse gas emissions by approximately 95% over traditional fossil fuels. We’re thrilled to have the first fleet of Amazon trucks powered by electrofuels starting next year, which will mark the beginning of a major shift for the entire transportation sector.”

This is Amazon’s latest initiative to reach its net-zero goals. Earlier, the company signed an agreement with Plug Power to supply nearly 11,000 tons per year of green hydrogen for its transportation and building operations starting in 2025. Amazon also recently ordered 100,000 electric delivery vehicles from Rivian, with thousands expected to be making deliveries in more than 100 U.S. cities by the end of this year.