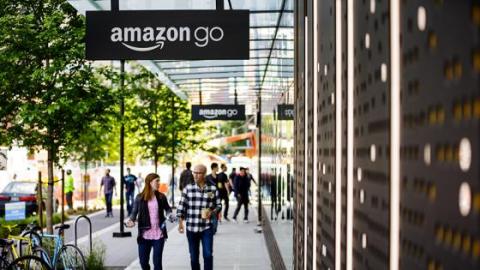 It remains to be seen whether the Naperville store will be bannered as Amazon Go Grocery, or have another banner.

Just a few days after opening its first full-sized grocery store in Seattle, Amazon is apparently set to open another grocery store, this time in a western suburb of Chicago.

According to the Chicago Tribune, Amazon is planning to open a grocery store in Naperville, taking over part of what had been a Dominick's supermarket on Illinois Route 59 in the southern part of the suburb. Amazon has submitted a liquor license application to the city to sell package goods.

An opening date for the store has not been released nor has the name of the store been announced. It remains to be seen whether the Naperville store will be bannered as Amazon Go Grocery, or have another banner.

The Tribune, which reviewed building department records, reported that the store will occupy more than 30,000 square feet. Its location is about three miles south of Naperville’s Whole Foods Market at 2607 W. 75th St.

Amazon is also planning a traditional grocery store in Woodland Hills, Calif., that will reportedly include many Amazon Go features.

The 10,700-square-foot Seattle store at 610 E. Pike St. opened on Feb. 25, offering an assortment geared toward city dwellers with small households. This merchandising strategy is evident from the breadth of categories offered, which is comparable to a typical suburban supermarket, but with an assortment that's highly curated and localized, and features smaller pack sizes within categories.

There are seven Amazon Go stores in the Chicago area, but none have fresh departments like the new Amazon Go Grocery in Seattle.

Amazon also has more than 10 Amazon Hub locker locations throughout the city of Naperville, where customers can pick up items purchased online.

Amazon, under its Whole Foods Market banner, is No. 10 on Progressive Grocer’s 2019 Super 50 list of the top grocers in the United States.