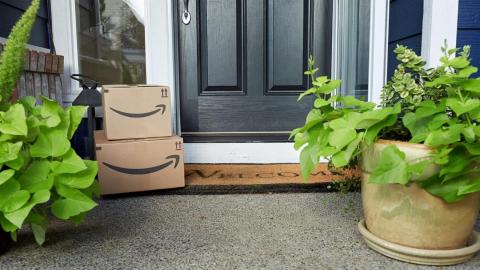 Amazon announced that it reduced average plastic packaging weight per shipment by over 7% in 2021.

At a peak of time of year for deliveries, with boxes and bags stacked on doorsteps around the world, Amazon is out with an update on its efforts to reduce packaging.

According to the retail giant, Amazon uses a combination of packaging materials, including paper-based options and plastic envelopes and bags. The company acknowledged that can be cumbersome for customers to return its recyclable plastic packaging to drop-off locations and is working to address that and other challenges.

Amazon goes full bore on its approach. “One of our first priorities has been to eliminate the use of additional Amazon packaging altogether, “the company announced in a blog on the corporate news site.

Even as its cuts down on packaging – Amazon reports that it reduced average plastic packaging weight per shipment by more than 7% in 2021 – the e-comm behemoth shared additional measures it is taking to improve its sustainability. Those steps include the use of machine learning to right-size packaging, minimizing the amount of paper used for each package and investigating ways to replace plastics with “existing material options” that are more readily recyclable.

Amazon also pointed to the recent launch of a curbside recyclable package that keeps grocery items from Amazon Fresh and Whole Foods Market stores frozen or chilled during delivery. That package uses recycled paper, eliminating the need for plastic liners or bubble-bag insulation. In addition, the company emphasized its collaborative efforts, including its involvement with the U.S. Department of Energy’s BOTTLE Consortium that seeks to create net-zero plastics.

“Compared to electric vehicles, green hydrogen, or the next generation of photovoltaics, packaging may seem rather mundane. But as you consider practical ways to minimize carbon emissions, eliminate waste, and increase recyclability, packaging is critical,” the company summed up in its post.

As Amazon mapped out its steps to reduce packaging waste, an environmental group was quick to weigh in on the matter. The ocean conservation advocacy group Oceana released a report this week focusing on Amazon’s plastic packaging. According to Oceana, Amazon generated about 709 million pounds of plastic packaging waste in 2021, an 18% increase over 2020.

Oceana acknowledged Amazon’s Dec. 13 update on its package reduction initiatives, calling it “a step towards increased transparency,” but noted that the reported figures represent only part of the company's global footprint and do not include orders fulfilled by third-party sellers. The group called on Amazon to publicly report on its plastic packaging footprint for all products sold through it website and independently verify that data, among other suggested measures.