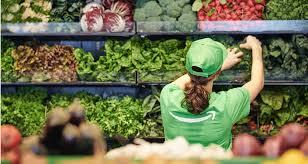 Philadelphia reportedly is about to gain its first Amazon grocery store — part of an effort by the company to bring more food retail to that general area, and the latest development in Amazon’s ongoing push to capture more grocery spending from consumers.

A new report from the Philadelphia Business Journal has Amazon signing a lease for 40,000 square feet of space on the ground floor of a building located at 6th Street and Spring Garden Street in the central part of the city.

Amazon offered no immediate comment, and it wasn’t immediately clear when the store might open or what type of Amazon grocery store it will be — or even if the grocery store would take up all of that space.

But if the report is indeed true, that square footage could indicate the upcoming arrival of an Amazon Fresh store. In late August, the Seattle-based company opened its first stand-alone supermarket banner: a 35,000-square-foot, digitally perfected store in Woodland Hills, California, called Fresh.

The Fresh banner is not an offshoot of Whole Foods, nor does it look like one of those checkout-less Amazon Go stores that have been popping up in urban areas across the United States.

By comparison, the largest version of the Amazon Go grocery store is apparently about 13,000 square feet, and located in Washington state.

Amazon’s plans to expand its grocery operations to the Philadelphia are hardly a surprise. Amazon is looking at “two sites in Bucks County and at least one in Center City, with the goal of opening them by the end of the year,” according to a report from earlier this year. It added that other retailers have left those sites. The publication noted that the recent food retail entrants in the region include Lidl and Aldi, while “existing retailers such as Giant Co. and Wawa have been adding locations.”

As Philadelphia prepares for more Amazon grocery activity, other shoppers in the East Coast region also are getting more familiar with the e-commerce operator’s food retail offerings. As of about a month ago, Amazon was prepping to open two brick-and-mortar stores in the Washington, D.C., area, with more to follow, according to a published report citing local job postings.