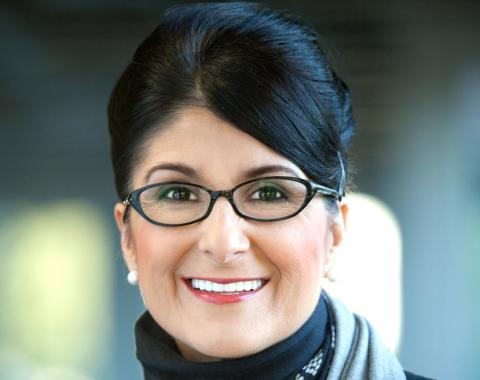 Sharon McCollam, 59, retired from Best Buy in 2016 where she served as EVP, chief administrative and CFO.

Albertsons Cos. is having quite a summer.

The grocery retailer has lured a retail transformation expert out of retirement to become its new president and CFO just a few weeks after announcing impressive earnings and an innovative deal with Uber.

The company says Sharon McCollam will fill the new CFO role on Sept. 7, reporting to CEO Vivek Sankaran. McCollam will succeed Bob Dimond, who will be retiring and will remain with the company as an adviser through February. With McCollam, Albertsons is building one of the most diverse C-suites in the grocery industry; McCollam joins COO Susan Morris and CMO Jennifer Saenz.

McCollam, 59, retired from Best Buy in 2016 where she served as EVP, chief administrative and CFO. She is broadly recognized as the co-pilot of Best Buy’s Renew Blue transformation, which has been regarded as one of the foremost omnichannel transformations in the retail sector.

“I am thrilled to have Sharon join the Albertsons team,” Sankaran said. “We are entering the next phase of our transformation, centered on building deeper relationships with customers through data, technology, and connected omnichannel solutions. Sharon has done just this throughout her career, helping to engineer multiple retail transformations, including the spectacular turnaround of Best Buy and the digital transformation at Williams-Sonoma. Sharon is well-known for her expertise in retail operations and digital growth strategies as well as her passion for building customer-centric cultures. I look forward to working closely with her to architect the evolution of our strategy and create value for all of our stakeholders.”

Prior to Best Buy, McCollam held several transformational leadership positions at Williams-Sonoma Inc. from 2000 to 2012, including COO and CFO from 2006 to 2012. Since retiring from Best Buy, McCollam has served as a member of several corporate boards, including companies with a strong consumer, e-commerce, and health care presence.

As president and CFO of Albertsons Cos., McCollam will assume several leadership responsibilities, including finance, corporate strategy, information technology, supply chain operations, and property development, and will be involved in all aspects of the company’s growth and transformation strategy. In addition to her proven financial leadership, McCollam brings broad retail and omnichannel operational expertise that will help accelerate the achievement of the company’s goals.

“I am thrilled to be joining Vivek and the Albertsons leadership team during this exciting time in the company’s history," McCollam said. "Albertsons Cos. is a family of iconic brands that empowers and values its people, obsesses over exceeding the expectations of its customers, communities and associates, and operates at the highest levels of humility and integrity in everything it does. It is thriving because its culture is built on values that its people and communities cherish and want to protect. It is a privilege to be joining this incredibly high-performing team and to be stepping back into such an exceptional opportunity that will allow me to leverage my broad multi-brand, multi-channel, and transformation experience as well as participate in one of the most exciting customer-centric digital transformations in integrated grocery and pharmacy today. I could not be more excited to take on this challenge and create the kind of change that will inspire our associates, our customers, and our shareholders.”

McCollam's appointment comes a week after the retailer reported a drop-off in sales from last year during the first quarter but sales growth compared to pre-pandemic 2019.

According to the company, sales and other revenue for Albertsons in first quarter reached $21.3 billion for the first fiscal quarter ending June 19. That stacks up against $22.8 billion for the same period in 2020 and $18.7 billion during the first quarter of fiscal 2019. On a two-year stacked basis, then, identical sales were up 16.5%. Gross profit margin dipped slightly, down from 29.8% in Q1 2020 to 29.1% in Q1 2021. For the first quarter of 2019, gross profit margin was 28%. Albertsons attributed an increase in gross profit margin of 10 basis points to higher pharmacy margins amid the administration of COVID-19 vaccines, productivity initiatives related to the optimization of promotions and growth in the company’s Own Brands’ penetration.

Uber says it has seen consistent growth in the United States for its grocery category since launching grocery delivery in July 2020. It has added major U.S. metro areas such as Miami, Dallas and Phoenix, to its delivery network, with more to come throughout 2021. Now, Albertsons banners such as Safeway, Jewel-Osco, Acme, Tom Thumb, Randalls, Albertsons and more are joining Southeastern Grocers and New York’s Red Apple Group on the Uber platform, available to consumers within the Uber and Uber Eats apps.