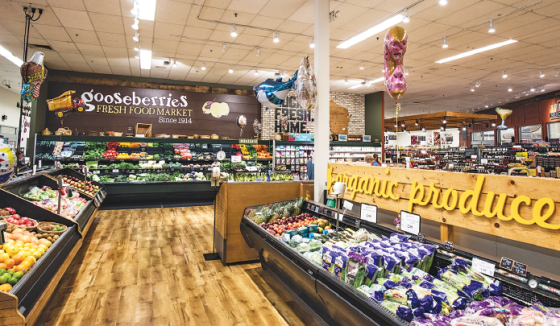 A couple of years ago, David Speigelhoff, owner of Gooseberries Fresh Food Market, in Burlington, Wis., found himself in a situation that’s familiar to many independent grocers.

“Gooseberries had been open since 2006, and it was at the tipping point of either reinvest and get yourself more niched in the market, or just don’t do anything and eventually die a slow, slow death,” he recounts.

Speigelhoff chose to invest $1.5 million to remodel the store to emphasize the perishables departments.

“We’re really focused about having our customers enjoy themselves and have fun,” he notes. “We want to offer a value, but we are not out there saying that we’re going to be the cheapest on pretty much anything. Come and have fun, come and enjoy yourself, try the food we offer. We really focus on having fun in the business.”

Customers walk into the store through the produce and floral departments before passing through sliding doors that lead into the deli, meat department, bakery and sandwich bar/hot food area before looping around the “food experience” to the wine shop and grocery center store.

“We have groceries, but it’s not a focal point for us anymore,” Speigelhoff says, although the store does a good business in ecommerce, which it introduced about five years ago, and which has taken off in the past year.

Gooseberries has also invested in catering, making the store a one-stop shop for customers planning parties, especially weddings. Party planners are situated at a kiosk in the store to answer phones and take all orders, in addition to helping customers coordinate all of their party needs across the various departments. When Gooseberries first introduced party planners in 2006, the business supported one part-timer. Now, four full-time staffers work with customers and also stop by the events that the store caters, to make sure that all is running smoothly.

Along with the remodel, Gooseberries acquired a liquor license that allows alcohol to be sold and consumed on premise, which helped open up new possibilities. The prepared food department — with a sandwich bar (that doubled in size with the remodel) offering 28 named sandwiches, a full-service deli with a variety of Boar’s Head lunchmeat and housemade salads, a growler bar, and a hot-food station offering five soups daily — features an expanded seating area for up to 55, with all products developed by the store’s executive chef. 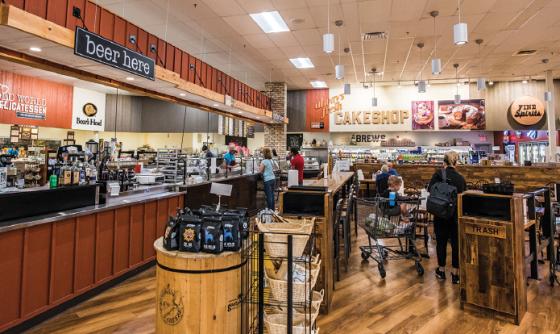 The bar serves a variety of drink specialties on the weekends, such as a Bloody Mary that includes chicken tenders, a slider, a barbecue pork slider and shrimp. “I mean, it’s a meal,” Speigelhoff notes. The item is served in a Mason jar along with a plate. Holiday weekends often feature mimosas with freshly squeezed orange juice from the store’s self-serve juicer.

The seating area is also full on Packers and University of Wisconsin game days, with customers watching the action as they enjoy the store’s food offerings and drinks.
Speigelhoff divided his wine, beer and liquor departments into separate departments: Hops, Grapes and Spirits. Part of the decision was dictated by space constrictions within the store.

The Spirits department offers a full selection of bourbons and whiskeys, while the Hops department has a 68-foot run with four shelves of specialty cheese showcased in the center.

“That has been well received, because more people pair cheese with beer than they do wine,” Speigelhoff explains.

The Grapes department is more of a wine store within the store, with wide-open aisles that make it easy for customers to wander and mingle, especially during the three to four different wine tastings that the store hosts on Saturdays.

“We just really made the store into a destination where it’s not necessarily just an in-and-out shop,” Speigelhoff says. “They can come in and spend a couple of hours actually enjoying the experience, have a drink or two, have a nice meal, and just spend some time here.”