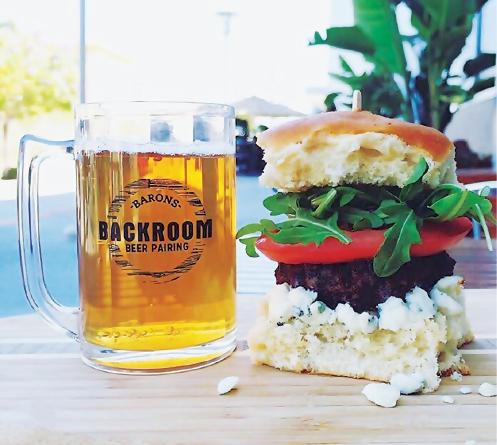 “We’re a neighborhood market, and we really live up to that description,” asserts Rachel Shemirani, VP of Barons Market, which has seven — soon to be nine — locations in the San Diego area. “Anything we can do to help the local community, we are in.”

In 2018, the stores donated or raised more than $300,000 for 280 organizations, ranging from local schools to pet rescue to food banks. Barons raises the monies through a variety of fundraisers, but one that has really taken off is the Backroom Beer Pairings, which match local craft brews with food offerings from the stores.

The events are held in each location on the same night, usually on Wednesdays from 6 to 8 p.m., once a quarter, with space for 80 to 100 people. Tickets are $15 per person, and 100 percent of the proceeds are donated to a local charity, which changes with each event.

According to Shemirani, craft beer is huge in San Diego, which boasts multiple local breweries, so creating a pairing event was a natural fit. Many of the local craft brewers host tastings in their back rooms, so Barons decided to recreate that experience by hosting its own events in its stores’ back rooms or on their loading docks. Shemirani’s team starts working with the brewer about six weeks ahead of time to select the four beer varieties and the food items they should be paired with.

“It’s a wonderful cross-section of people, from ones who are just turning 21 to people in their 80s,” she notes. “People come for all different reasons, but what they really love is that it goes to support a local charity.”

Last year, the beer pairings raised about $28,000 for a variety of causes, including area schools, Feeding San Diego and a local breast cancer organization. The brewery that participated in the October breast cancer event also created a special pink can to help raise awareness. One of the quarterly events also benefited the community of Alpine, which was devastated by a wildfire.