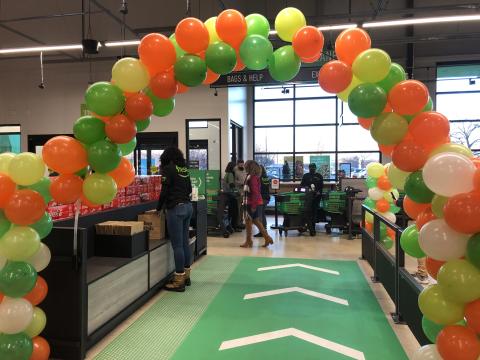 The Naperville, Illinois, Amazon Fresh store — the first in the Midwest — was festooned with balloons on its grand-opening day of Dec. 10.

The first Amazon Fresh store in the Midwest opened, in Naperville, Illinois, on Dec. 10, just after dawn. It was, indeed, the dawn of a new grocery era in the Chicago area, as curious shoppers began lining up about a half-hour before the doors were unlocked at 7 a.m.

A round of enthusiastic applause from the Amazon Fresh store team — and a bouquet of red roses — greeted the first customer, a shopper who brought her two young children. The third shopper in line, Jackie Burns of Naperville, said that she drove past the store as it was being renovated and wanted to be among the first to check it out.

“I want to look at the fresh vegetables and meat and compare it to other stores in this area,” said Burns, adding that she typically divides her grocery shopping among nearby Jewel-Osco, Mariano’s, Aldi and Whole Foods (an Amazon subsidiary) stores.

Given the novelty of the shopping cart technology, dozens of Amazon Fresh team members were on hand to guide the first visitors through the process of scanning QR codes to activate the Amazon app and later, how to check out conveyor-less at the Amazon Dash Cart area.

Staffers also directed customers who didn’t have the app where they could find regular carts and baskets, and pointed out end cap displays where shoppers could use the Amazon Alexa Echo device to find particular products on their list or to get more information on pricing and pairings. Reflecting what must have been a training emphasis on helpfulness, nearly every employee welcomed shoppers they passed with a smile and asked how they could be of assistance.

The 35,000-square-foot store in a former Dominick’s grocery location is lined with an array of products displayed in tall shelves, free-standing cases and end caps. Just past the expansive fresh produce section and frozen meat area at the front end of the store, a small fresh meat, poultry and seafood service case showcases fresh and value-added proteins, from seasoned bacon to ready-to-cook portions of Korean barbecue marinated sirloin flap.

Although the boxy layout could be considered traditional, with a fresh perimeter and center store aisles, the Naperville Amazon Fresh store is designed to highlight solutions for shoppers. For example, salad dressings and other accompaniments are located next to the fresh produce department, while sauces and condiments face the fresh and frozen meat sections.

The prepared food area, likewise, is set up to solve shoppers’ snack and meal occasions.  Grab-and-go purchases are plentiful, whether it’s pre-packaged single-serve pastries or sizable cases filled with packaged sandwiches, wraps and salads. The Fresh Kitchen is the Amazon Fresh foodservice-at-retail solution, offering pizza, sushi, sandwiches and a “carvery.”

Packaged prepared meals are merchandised in this space, too, and span refrigerated fresh options like Amazon Kitchen-branded Pesto Zoodles with Shrimp as well as frozen heat-and-eat entrées such as eggplant parmesan. For the upcoming holiday season, the store will offer prepared mashed potatoes, green bean casserole and balsamic roasted Brussels sprouts, among other favorites.

As they wound past the prepared food and bakery aisles — one-way, of course, in the COVID-19 era — first-day shoppers ended up at the brightly colored customer service department, where Amazon purchases can be picked up or returned without the need for boxes, labels or tape. A small display of Amazon.com gifts and home merchandise is set up there, ranging from air fryers to cookbooks to French presses.

As one would expect from a store opening, special BOGO deals and savings were offered to the first Amazon Fresh shoppers in Illinois, including price reductions on holiday staples such as ham, pie and wine/beer. Curbside pickup and delivery are also available.

Amazon Fresh is located at 3116 South Route 59 in Naperville. Additional locations are planned for other Chicago suburbs, including Bloomingdale, Oak Lawn and Schaumburg.

Under the Austin, Texas-based Whole Foods Market banner, Seattle-based Amazon is No. 1 on Progressive Grocer’s 2020 PG 100 list of the top grocers in the United States.

Seattle-based Amazon is No. 1 on ThePG 100 list, Progressive Grocer’s 2020 list of the top food and consumables retailers in North America, while its Austin, Texas-based Whole Foods Market banner is No. 24. 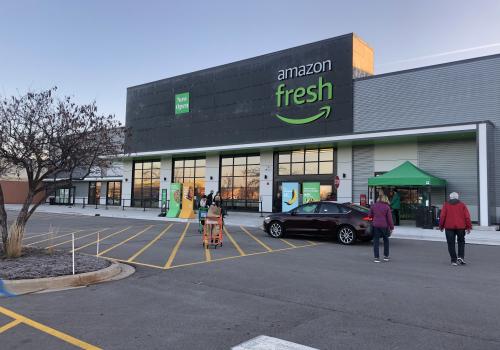 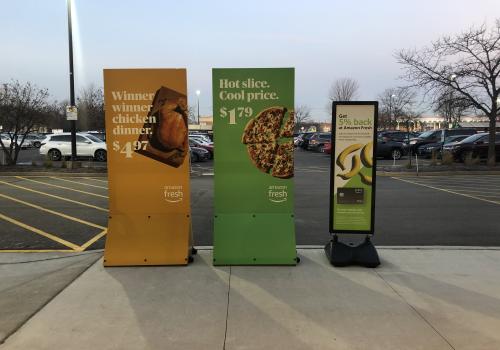 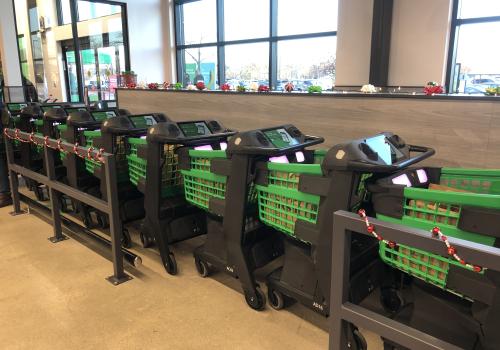 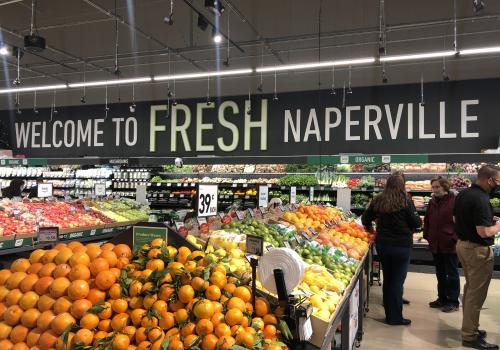 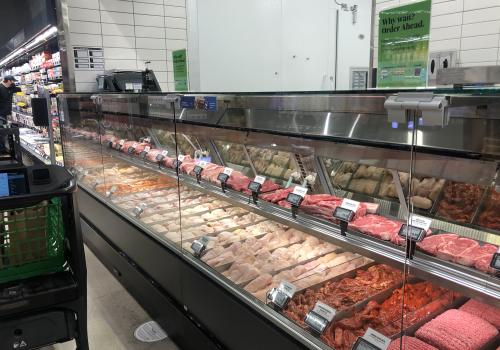 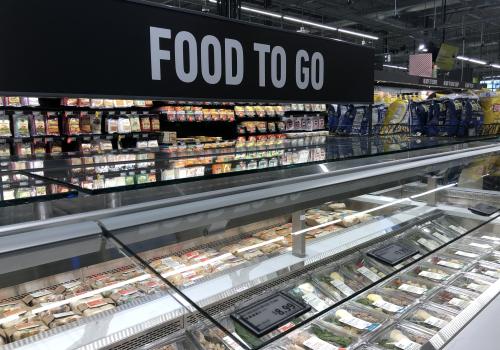 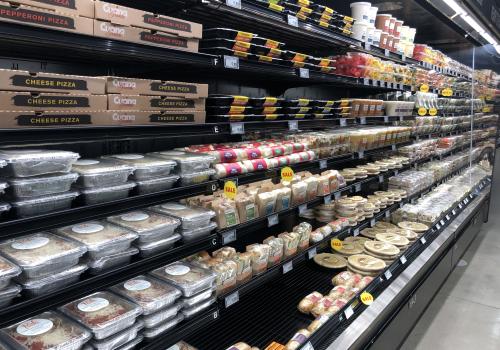 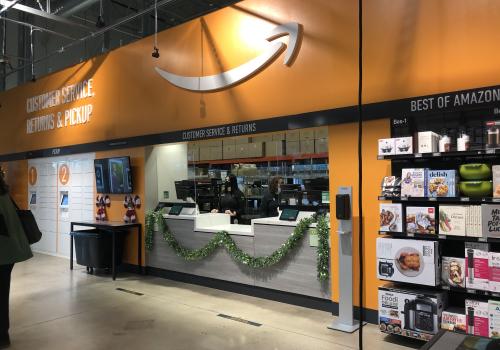 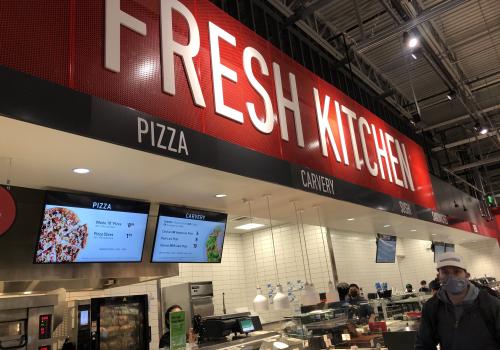 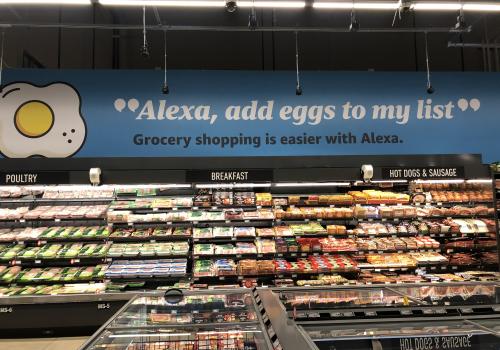