America’s companies, including CPGs and retailers, are getting on board with more gender-diverse boards of directors.

While there has been an ongoing push for greater female representation in leadership positions and boardrooms, the pace of change — and the impetus behind it — has picked up in recent years.

According to the 2019 Gender Diversity Index, released by the 2020 Women on Boards (2020WOB) organization and conducted by Equilar, women hold 20.4% of board seats on a national basis for the first time. 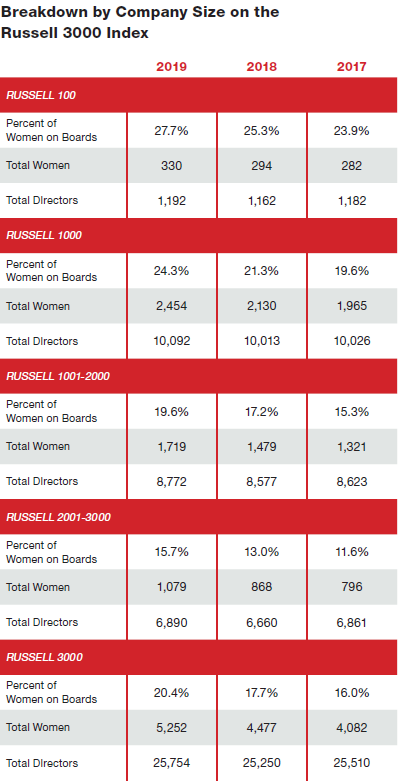 In a 2019 survey from PricewaterhouseCoopers (PwC), women were found to hold 24% of board seats in Standard and Poor (S&P) 500 companies, compared with 19% in 2013. Each company in the S&P 500 had at least one woman on its board of directors as of the time of the survey.

The 2019 U.S. Spencer Stuart Board Index that assesses board governance practices also supports growing inclusivity. That index showed that women represented 46% of the most recent class of new directors on S&P 500 boards, the most since 2004.

Within the consumer goods industry, more females are in board directorship roles today.

According to the “Board Monitor U.S. 2019” report from Heidrick and Struggles, 63% of the 183 director positions filled by women in 2018 were in the consumer goods industry, followed by the industrial and financial services sectors. Comparatively, in 2017, the majority of new board members served on industrial boards.

There are several examples of more balanced governance in the CPG and retail industries. In its Gender Diversity Index, 2020WOB/Equilar distinguishes some organizations with boards of directors as “winning,” compared with those that are “transforming,” “very close” or at “zero.” Walmart, for example, earned a “winning,” or “W,” rating on the index for having three women on a board of 12. In the arena of large CPGs, Conagra Brands has three women out of 11 members and Kraft Heinz has four out of 11, also earning these companies a “W” distinction.

There are various and simultaneous reasons behind the recent progress in balancing boards of CPG companies and food retailers to include more women.

Part of the focus stems from a broader women’s movement over the past few years, tied to events and discourse in the cultural, entertainment and political realms. That movement has led to pressure from stakeholders and consumers to make companies, including major CPG businesses, move faster to give female leaders a fair shot at the table.

Buoyed by multiple generations of women (and men), the path to parity has been helped along by individuals and groups that have banded together with a common goal of more equitable representation.

One of those initiatives is 2020WOB. Started in 2011, the group was founded to create awareness and actions to raise the percentage of women on the boards of Fortune 1000 corporations to 20% or greater by 2020, through events around the country and other grass-roots and high-profile outreach efforts. The 20% goal was reached in 2017, after which 2020WOB shifted its goal to the roster of Russell 3000 Index companies, composed of 3,000 large U.S. companies as determined by market capitalization.

The newly formed Women on Boards (WOB) Project is another organization that advocates for more gender diversity on boards. The co-chair of the project is Sheryl O’Loughlin, former CEO of Rebbl Inc. and Clif Bar and Co., and co-founder of Plum Organics. Already in 2020, the WOB Project has partnered with private-equity firms and at least 20 companies committed to adding at least one woman or more to their boards. 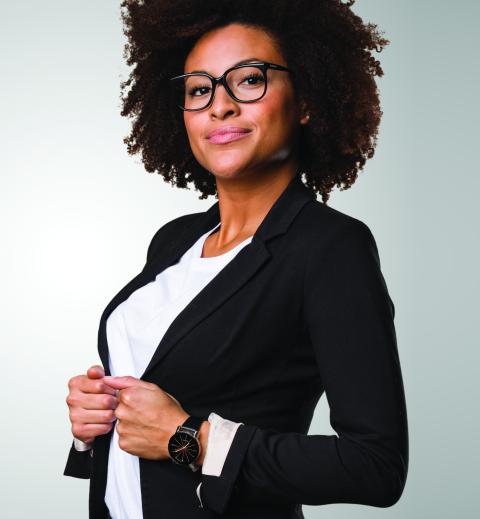 In addition to the influence of advocacy and activist organizations, various forms of legislation and quotas have been other, albeit controversial, catalysts in the influx of more women directors. A 2018 California law called for all boards of public companies with headquarters in the state to have at least one female director by 2019 and two female directors for boards with five directors.

Such mandates have both fans and detractors. The notion had a lukewarm reception in the 2019 Annual Corporate Directors Survey from PwC, with 83% of directors saying that they don’t believe legislation is the best way to create a diverse board. Moreover, that assessment is shared by 54% of female directors.

At the same time, many businesses with boards of directors are coming to the realization — without legislation — that their leadership should comprise people who reflect their consumer base.

As the “Board Monitor” report from Heidrick and Struggles notes: “Recently, we have encountered more boards that make it clear from the outset of a search that they do not want to merely see a diverse slate of candidates — on many measures of diversity — but that they intend to appoint a diverse candidate.”

The scale isn’t yet balanced in that regard, however. According to the WOB Project, women drive 70% to 80% of consumer purchases, and are accordingly underrepresented on boards of directors of companies that provide such products.

Celia Huber, senior partner at the Silicon Valley office of the McKinsey consulting firm, underscores the gaps between company leadership and the audiences their companies serve. “Even in retail, which one would argue has the most women at entry level and women as customers, it was a variety of percentages of gender diversity on the boards,” Huber remarks in a McKinsey podcast on the topic. “Even in retail, it was the CEO and chairman who explicitly had to put women on the board and make that a goal to make this really happen.”

A board that mirrors its diverse marketplace can reap several benefits.

In PwC’s survey, 94% of respondents said that board diversity leads to unique perspectives, and 87% believe that diversity enhances board performance.

Despite recent progress, parity in the boardroom is still some way off. The Gender Diversity Index found that 311 companies on the Russell 3000 Index still have no women on their boards. If 1.0 is parity, the current rate of women on boards is 0.43.

Other research reveals a hint of waning enthusiasm after several years of focus on gender-diverse boards. PwC’s 2019 Annual Corporate Directors Survey reveals that 38% of directors agree that gender diversity is important to their boards, down from 46% in 2018. More than two-thirds (63%) of directors say that there has been too much attention on gender diversity.

If the number and caliber of female leaders chosen as Progressive Grocer’s Top Women in Grocery have grown in recent years, the state of change in the industry is also creating a pipeline of future female directors. While some female board members have a background in complementary or otherwise relevant industries, CPG companies and retailers with boards have also added directors with a strong breadth and depth within the food industry.

At the nation’s top CPG companies, more women have been named to boards in recent years, shifting the composition and, sometimes, the focus of those organizations. Likewise, there are examples of women who are making inroads in directorships of retail companies with boards of directors, as part of their leadership teams.

Let’s meet a few of these top women in board leadership:

Mikel A. Durham, Tyson Foods Inc.: Durham has been a director at Springdale, Ark.-based Tyson Foods since 2015. She was named CEO at American Seafoods Group in 2017, and prior to that was the global chief commercial officer of CSM Bakery Solutions. Durham gained other industry experience at PepsiCo, Guinness, Burger King North America and Cadbury Schweppes.

Alexis M. Herman, The Coca-Cola Co.: Herman is one of five women on a 12-person board at Atlanta-based Coca-Cola and chairs the board’s policy and sustainability committee. Chair and CEO of New Ventures LLC, she first joined the Coca-Cola board in 2007. In addition to Coca-Cola’s board, she has served as chair of the business advisory board of food and facilities management company Sodexo Inc. and is director at Cummins Inc., Entergy Corp. and MGM Resorts International. Herman was U.S. secretary of labor from 1997 to 2001.

Lois D. Juliber, Mondeléz International: She is one of three women on a board of 12 at Deerfield, Ill.-based Mondeléz International. Retired from her last role as vice chairman of the Colgate-Palmolive Co., where she was also COO, Juliber also spent 15 years at Mondeléz’s predecessor organization, General Foods Corp. Additionally, she’s a director at Corteva Inc., and a former director at DowDuPont Inc. and Goldman Sachs Group Inc.

Patricia Little, McCormick & Co. Inc.: Little has been a board member at Hunt Valley, Md.-based McCormick since 2010 and serves on the nominating and corporate governance committee. She is the former SVP and CFO of The Hershey Co.

Melissa Lora, Conagra Brands: Lora took a seat on Chicago-based Conagra Brands’ board of directors in January 2019 as one of 10 members. She has held a variety of leadership positions at Taco Bell Corp., including a role as president of its international business. Lora has also served on the board of homebuilder KB Home and of MGIC Investment Corp.

Carolyn Tastad, Kellogg Co.: Battle Creek, Mich.-based Kellogg Co. has appointed five women to the board of directors, which currently stands at 12 total members. Tastad joined the group in 2015 and serves on the manufacturing, the compensation and talent management, and the nominating and governance committees. She is group president, Procter & Gamble North America, and also serves on the board and executive committee of the Consumer Brands Association and the Cincinnati City Center Development Corp.

Jessica Blume, Publix Super Markets: Blume was a consulting expert for more than 25 years at Deloitte, where she was national marketing director, managing director of research and innovation, and vice chair. She joined the board of Lakeland, Fla.-based Publix in 2016.

Melanie L. Healy, Target Corp.: Former group president, North America of The Procter & Gamble Co., Healy held several other leadership roles at that CPG company, and also worked in market leadership roles at Johnson & Johnson and S.C. Johnson & Sons. She has served on the board of Minneapolis-based Target since 2015.

Sue Klug, Gelson’s Markets: Encino, Calif.-based Gelson’s appointed Klug in 2019. The former grocery industry executive is currently chief marketing officer and EVP at Republic Services, a recycling and nonhazardous solid-waste disposal company. Before joining Republic Services, she was a chief marketing officer and EVP for Unified Grocers and spent nearly a decade with Albertsons. Klug has also served on the board of the Independent Grocers Alliance and the Western Association of Food Chains.

Susan J. Kropf, The Kroger Co.: On the board of Cincinnati-based Kroger since 2007, Kropf is retired from her latest position as president and COO of Avon Products Inc. She has served on many boards of public companies and works on the compensation and corporate governance board of Kroger, where she’s one of four female board directors.

Marissa A. Mayer, Walmart: The co-founder of Lumi Labs and former president and CEO of Yahoo!. Inc., Mayer joined Walmart’s board in 2012 and serves on the compensation and management development and the technology and e-commerce committees. Before joining Lumi Labs and Yahoo!, she spent more than a decade at Google Inc.