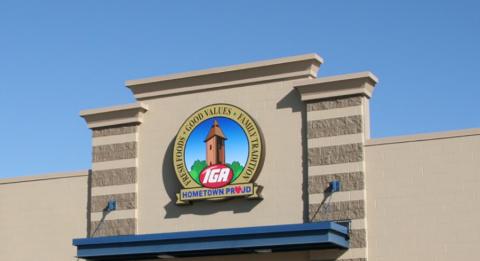 What did your grandmother cook?

If you grew up in Oklahoma like me, it was meatloaf, mashed potatoes, buttered carrots. Or spaghetti night, with salad and green beans. Or summer Saturday barbecue, with corn and cucumber salad.

Problem is, I’m a white male Baby Boomer, and to generalize those meals across American families today is nothing short of arrogant. The recipes that defined my life were totally different from those for my Louisiana-born wife or my New York-raised college friends.

There’s a reason that an American grocery store carries 38,000 items: American families are diverse, and what they eat is as diverse as their backgrounds. And that diversity is growing, both in the ethnicity of American families and in the food palates of all shoppers.

Hummus, avocados, Greek yogurt, bagels – they’ve all become top-selling SKUs across the United States, even though the those products hail from vastly different places.

Government’s Not the Answer

That makes it all the more unreasonable that the federal government wants to overhaul the Supplemental Nutrition Assistance Program (SNAP) with a “Harvest Box” sent to economically challenged homes, filled with shelf-stable items that the government decides families should eat. How could an administrator decide what’s going to be good for millions of families in need? The reality is that very few items in your local grocery store are common to all shoppers. In fact, most items have a basket penetration of 1 percent or less.

Let’s put aside for a moment, however, the argument that a one-size-fits-all approach to SNAP is bad for American families in need and explore instead the problem that the government is trying to solve: the expense and inefficiencies behind the program. The administration estimates that substituting food deliveries for food assistance payments would save $129 billion over a decade. That’s all well and good for the American taxpayer, but the logistician in me has a hard time understanding how we gain efficiency within SNAP by moving the distribution of food from the private sector — and the most efficient food distribution system in the world — to a government layered with bureaucracy.

Each day, our industry sources, ships, warehouses and distributes to local grocery stores in neighborhoods across America, allowing American families to get the widest selection of products at just pennies over cost. At IGA alone, we have more than 1,100 U.S. family-owned grocery stores, located from downtown Seattle to the deep rural south; from federal Indian reservations to the Florida Panhandle. We supply fresh eggs, milk, bread and produce daily to the most remote locations imaginable. Even Amazon Prime won't support every neighborhood we serve. That begs the question, how will the U.S. government do it, and save $129 billion to boot?

Let’s work to take cost out of SNAP; let’s reduce waste and improve nutrition. But please, please, let’s use logic, real data and good reason to come up with real solutions that don’t involve the word 'box.'

According to a USDA representative, the Harvest Box proposal was directly modeled after the Commodity Supplemental Food Program (CSFP), a program for economically challenged seniors in which states order boxed foods from a preset list, and develop their own delivery and distribution networks.

But modeling a new program after an existing one only makes sense if the original program works well, and as The Washington Post recently noted, the CSFP is fraught with flaws.

Let’s start with the infrastructure issues. In most states, these senior-assistance boxes are packed by volunteers and nonprofits that are subcontracted by the state, and then seniors are tasked with picking up their boxes from a central location.

Yes, let’s work to take cost out of SNAP; let’s reduce waste and improve nutrition. But please, please, let’s use logic, real data and good reason to come up with real solutions that don’t involve the word “box.” Our industry, our communities — and most importantly — the people we serve are all depending on us.

Now let’s assume that the proposed SNAP Harvest Box is managed in much the same way. So, keeping in mind that we’re talking about serving tens of millions of people as opposed a few hundred thousand served by CSPF, are we going to rely on volunteers and nonprofits to pack the Harvest Boxes, too?

Then there’s the food itself. CSFP, like the Harvest Box proposal, provides seniors with minimal or no choice in the foods they receive, and that becomes an even more glaring problem when you consider cultural and dietary restrictions. In a box meant for seniors, the USDA doesn’t currently supply dairy substitutes, gluten-free grains, or low-sugar juices for diabetics.

Which brings us back to food choice versus food curation. One of the objectives for the Harvest Box seems to be a desire to shift poor families from poor choices to healthier ones. Frankly, most Americans could use this sort of assistance; it isn’t just poor families that are facing the epidemic of obesity, diabetes and other calorie-related health problems that plague our nation.

But assembling and shipping food is about the worst way to address the problem of nutrition. The items that store and ship the best are often sodium-heavy, chemical-laden and highly processed — in short, the kinds of foods designed for shelf-stability rather than nutritional value. And that’s then assuming that the families would even want to eat them.

So, will the Harvest Box increase efficiencies and lower costs in SNAP? I contend that it won’t. And more than that, it has the potential to hurt the very people who most need our help.

Want one more reason it won’t work? Let’s stop and think for a moment about the economic impact of cutting grocers out the equation. IGA alone stands to lose up to $2.7 billion of our $8 billion in U.S. sales, which would mean the closing of hundreds of stores. Shutting down what is often a primary source of employment in rural towns across America is clearly not the way to get people off SNAP.