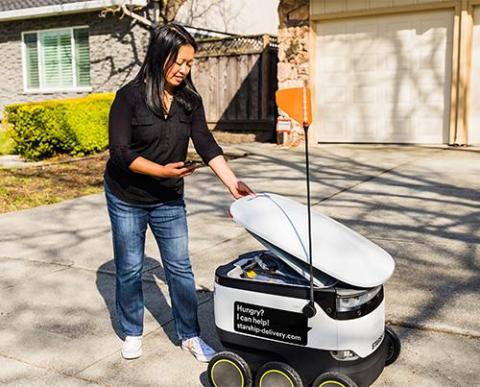 Before the tech provider moved out of Northern California, Save Mart shoppers in Modesto and Pleasanton could receive last-mile orders from robots.

After rolling out — literally and figuratively — over the past couple of years, Save Mart Co.’s grocery delivery robots in Modesto, Calif., have been pulled from the streets. According to a report in the Modesto Bee, the retailer’s technology partner, Starship Technologies, halted the autonomous delivery fleet in that market.

In an email to the newspaper, Save Mart spokeswoman Victoria Castro confirmed the move, noting that Starship “made the decision to exit Northern California.”

Starship Technologies did not comment on the Save Mart decision , but it did report a scaling back of operations in a June 9 news release: “The global economy and investment market have taken dramatic downward shifts recently and, like many other startup and tech companies, Starship has been impacted and will be making changes …These changes mean that we are closing a small number of service locations in the U.S. and Germany over the next two months.”

The fleet for Save Mart’s flagship store in Modesto was launched with some fanfare during the height of the pandemic in September 2020 and grew from 20 to 35 robots. As recently as February, Save Mart expanded its partnership with Starship to provide the touchless delivery service to customers of its Lucky California store in Pleasanton, Calif.

The concept was straightforward: Shoppers could use Starship's food delivery app to order groceries and share their location. Save Mart associates fulfilled orders in store and placed items in the robot for delivery, which was typically done at pedestrian speed on sidewalks.

While Save Mart shoppers in Modesto and Pleasanton may no longer open their doors to pick up groceries from the signature white robots, the technology is still being deployed in other parts of the country. Robots — including those operated by Starship Technologies — are serving students at several college campuses around the country. Uber Eats expanded its partnership with Serve Robotics to provide autonomous delivery in Los Angeles. Last year, the Safeway banner from Albertsons Cos. tested delivery robots from tech partner Tortoise at a location in Northern California; East Coast chain ShopRite has also piloted Tortoise’s robots as part of a collaboration between parent company Wakefern Food Corp. and the tech provider.

Tortoise, for its part, is also making some changes in light of the current market climate. The tech startup recently shared that it is shifting its focus to mobile “smart stores,” which are more of a vending model than a last-mile delivery service.

Based in Modesto, Calif., The Save Mart Cos. operates more than 200 retail stores under the banners of Save Mart, Lucky California and FoodMaxx. In addition to its retail operation, the company also operates SMART Refrigerated Transport and is a partner in Super Store Industries, which owns and operates a distribution center in Lathrop, Calif., and the Sunnyside Farms dairy-processing plant in Turlock, Calif. Save Mart is No. 55 on The PG 100, Progressive Grocer’s 2022 list of the top food and consumables retailers in North America. Boise, Idaho-based Albertsons Cos. is No. 9. and Wakefern Food Corp. is No. 25.