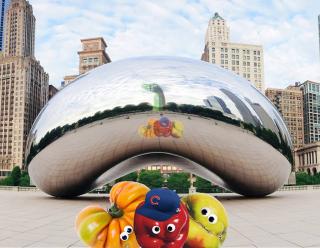 An ecommerce startup specializing in delivering produce typically deemed too “ugly” to sell by many grocers today has expanded its operations from the West Coast to the Windy City.

Based in San Francisco, Imperfect has begun delivering cosmetically flawed fruits and vegetables in the Chicago area at prices 30 to 50 percent below those at nearby grocery stores, sourcing the produce directly from farmers. While one in five fruits or vegetables grown domestically doesn’t fit grocers’ strict cosmetic standards, often leading to waste, the delivery service works directly with these farmers to recover roughly 300,000 pounds of produce a week, a total of 9.2 million pounds overall. Doing so, Imperfect helps customers of its subscription boxes save money, eat healthier, support farmers and fight food waste.

“Chicago is one of the biggest metro areas in the U.S. and has long been a hub for food and culture,” said a spokesperson of Imperfect, which comes to the region after operating in and around Los Angeles; San Francisco; Portland, Ore.; and Seattle. “People turn to Chicago to see where the food world is going. Expanding to Chicago helps us keep even more produce from going to waste and helps Chicagoans get access to affordable and healthy produce.”

To shop Imperfect, customers sign up for a box (small, medium, large, extra large) online, choose their produce (organic, conventional, fruit, vegetables or a mixture), choose a weekly or biweekly delivery option and delivery window, and select one of three delivery windows on their given delivery day, which is dependent on where they live. Boxes can be customized according to the service’s menu, which changes every week, and are delivered directly to customers’ doors for a small fee (click-and-collect options are not available).

While about 25 percent of the produce is local to the Midwest, all of it will come from outside the Great Lakes region – save some root crops and apples – when winter hits, as is the norm in the produce industry. However, Imperfect will source locally whenever possible.

“Our produce sourcing varies by the day and the week, depending on the weather and the seasons,” the spokesperson said. “Ultimately, our philosophy as a company is ‘follow the waste.’ Since over 80 percent of our fresh produce as a country is grown in California, this is where we source much of our produce for all of our markets, including Chicago.”

Although Imperfect works with a number of community organizations out west to fight and end food waste and hunger – such as Food Shift, the Alameda Food Bank, SF-Marin Food Bank, the Emeryville Community Assistance Program, LA Kitchen and more – it is partnering with the Greater Chicago Food Depository for aid efforts in its latest market.