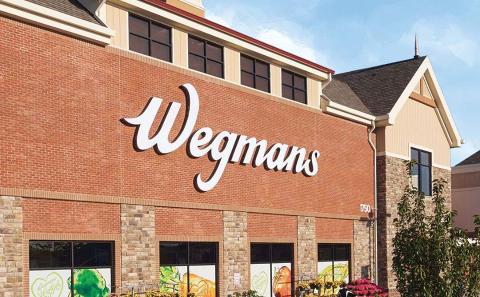 Wegmans plans to go beyond the state-mandated ban on single-use plastic bags by reducing in-store plastic packaging made from fossil fuels.

New York's statewide ban on single-use plastic bags goes into effect March 1, 2020, so Wegmans is getting ahead of the situation by eliminating them at its 47 New York stores on Jan. 27.

The grocer began a pilot in July to eliminate the plastic bags at its Ithaca and Corning, N.Y., stores. Paper bags remained available for a 5 cent charge — with money from the sale going to the Food Bank of Southern Tier — encouraging shoppers to convert to resuable bags.

"We learned a lot from the pilot that will help ensure a smooth transition out of plastic bags in the rest of our New York stores for our customers and employees," Jason Wadsworth, Wegmans packaging and sustainability manager, told Western New York news outlet WGRZ-TV. "On average today, 20% of the bags used across all Wegmans stores are reusable. However, at our pilot stores in Corning and Ithaca, we’ve flipped that statistic so that only 20% of the bags used are single-use bags."

Wegmans first introduced reusable bags in 2007, and according to a recent survey of its customers, 95% already own at least one reusable bag, and 87% have three or more.

The grocer also plans to reduce in-store plastic packaging made from fossil fuels, as well as other single-use plastics such as straws, by 2 million pounds in 2019, with a goal of a 10-million-pound reduction by 2024.

Family-owned Wegmans operates 99 stores in New York, Pennsylvania, New Jersey, Virginia, Maryland and Massachusetts. The company is No. 16 on Progressive Grocer’s 2019 list of the top grocers in the United States.