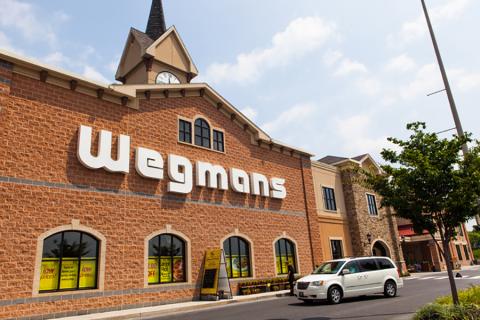 Ahead of a 2020 ban of single-use plastic bags in New York state, Wegmans is running a pilot in two stores to eliminate the bags and encourage shoppers to switch to reusable ones

Wegmans is rolling out a pilot that will eliminate plastic grocery bags at its Ithaca and Corning, N.Y., stores. The pilot follows the news last April that Wegmans would phase out plastic bags at all of its New York state stores in advance of a state-wide ban set to go into effect on March 1, 2020.

Paper grocery bags will still be available at the pilot stores, although shoppers will be charged 5 cents for each bag. By doing this, the grocer aims to convert all customers to reusable bags, thereby eliminating the need to charge. In the meantime, the money from the sale of the paper bags will go to the Food Bank of the Southern Tier.

“We are determined to do what’s right by encouraging all of our customers to switch to reusable bags, the best option to solve the environmental challenge of single-use grocery bags,” noted Rochester, N.Y.-based Wegmans. “A consequence of a plastic bag ban will be an increase in the use of paper bags, which for a host of reasons, are bad for the environment. In stores where a small fee is charged, reusable-bag usage goes up dramatically. If, together, we can make that happen in our 46 New York state stores, it will have an immeasurable environmental impact for decades to come.”

For instance, in Germantown, Md., where Wegmans is required by law to charge a 5-cent fee for paper and plastic bags, 65 percent of bags used are reusable, versus a 20 percent average in the retailer’s New York state stores.

Wegmans first introduced reusable bags in 2007. According to a recent survey of its customers, 95 percent already own at least one reusable bag, and 87 percent have three or more.

Other retailers pledging to get rid of single-use plastic bags include Big Y Foods, the Kroger Co. and Natural Grocers by Vitamin Cottage.

Family-owned Wegmans operates 99 stores in New York, Pennsylvania, New Jersey, Virginia, Maryland and Massachusetts. The company is No. 16 on Progressive Grocer’s 2019 list of the top grocers in the United States.