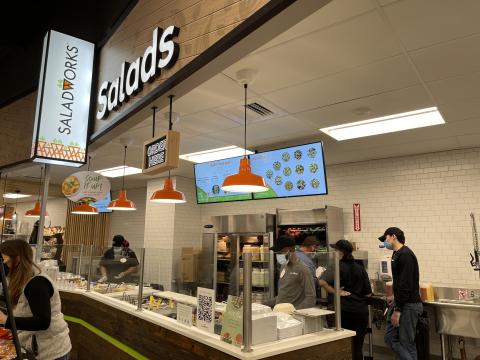 The Giant Co. recently opened a flagship store in Center City Philadelphia that contains a Saladworks, the second such eatery inside a Giant store.

Walmart is opening as many as 60 Saladworks kitchens and eateries in its U.S. stores.

Saladworks teamed up with Ghost Kitchen Brands to double the Saladworks footprint across the United States and Canada. The signed agreement will bring 60 non-traditional locations to the U.S. and 30 to Canada by the end of 2021. Many of these new kitchens will live inside Walmart stores offering some seating, and all locations included in the deal will offer carry-out and third-party delivery.

"Saladworks is a perfect strategic partner for Ghost Kitchen Brands as we continue to grow and reinvent the restaurant industry with our unique restaurant concept," said George Kottas, founder and CEO of Ghost Kitchen Brands. "We are excited to include Saladworks' range of healthy and flavorful options to our customers allowing customizations and combinations with other brands, all in the convenience of one order."

Saladworks, which is part of the newly formed WOWorks family of brands, currently has around 130 locations in North America. The deal will bring Saladworks into untapped states, including South Carolina, Iowa, Idaho, Kansas, Louisiana, Missouri, Oklahoma, Oregon and Washington, as well as Canadian provinces, including Ontario, Quebec and Alberta. Fellow WOWorks brands, Frutta Bowls and Garbanzo Mediterranean Fresh, have also partnered with Ghost Kitchen Brands for expansion as part of a smaller test agreement.

"We are very excited to have Saladworks included in this growth vertical to bring our healthy, fresh concept to millions of new guests across North America," said Eric Lavinder, chief development officer for WOWorks. "Ghost kitchens have already proven to be an economical and highly successful expansion tactic for us, and this new deal with Ghost Kitchen Brands will allow us to continue solidifying Saladworks as the leading fast-casual salad brand."

The deal with Ghost Kitchens marks yet another major milestone for Saladworks in a banner year of growth. After growing by more than 40 restaurant locations in 2020, which included non-traditional retail presences such as universities, ghost kitchens and more, Saladworks' parent company recently acquired Frutta Bowls, Garbanzo Mediterranean Fresh and The Simple Greek to form WOWorks. The newly formed family of brands share a core DNA designed to meet a growing demand among Millennial families and GenZ guests who crave healthy, nutritious and flavorful dining options with a high level of customization and convenience. In addition to Saladworks, the new WOWorks entity is also expecting significant growth for Garbanzo Mediterranean Fresh, Frutta Bowls and The Simple Greek in 2021.

“Grocery stores are an exciting growth area for our brand,” said Lavinder, who is also VP of development for Conshohocken, Pennsylvania-based Saladworks. “With COVID-19 bringing safety challenges to self-serve food bars in grocery stores everywhere, guests can feel safe with Saladworks. Guests can get the same great experience and variety at a grocery location as they can a traditional restaurant.”

Founded in 1986, Saladworks is the nation's leading fast-casual create-your-own salad destination, with over 130 locations across 18 states and two countries.