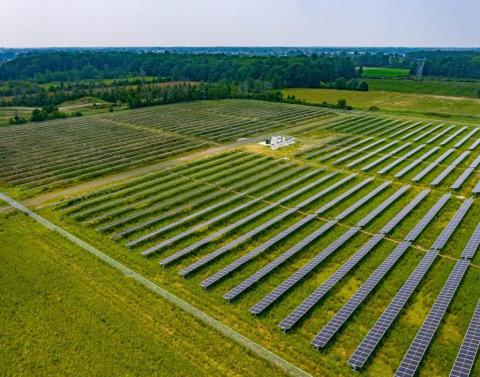 Walmart has teamed up with Nexamp on one of the largest community solar projects in the country.

The retailer has signed a deal to support 129 megawatts of community solar projects in New York. Walmart is subscribing to a share of each of 23 Nexamp solar farms across New York and will receive energy credits equivalent to approximately 50 megawatts of the entire portfolio. Walmart has 32 stores, four Sam’s Clubs and one distribution center participating in the program across the state.

“Walmart continues to lead by example through its bold commitments in support of a cleaner energy future,” said Nexamp CEO Zaid Ashai. “By enrolling in our community solar program, Walmart demonstrates its understanding of the urgency of climate change issues, and that these issues can be addressed in ways that also provide significant economic value.”

Walmart set a goal last year to be a regenerative company — one that works to restore, renew and replenish, in addition to preserving, our planet. As part of that goal, it is targeting zero emissions by 2040 across its global operations and aims to harvest enough wind, solar and other renewable energy sources to reach its goal of powering 100% of its facilities with renewables by 2035. Currently, 36% of Walmart’s operations worldwide are powered with renewable energy. As of the end of 2020, Walmart had more than 550 onsite and offsite projects in operation or under development in eight countries, 30 U.S. states and Puerto Rico.

“Community solar at this scale allows Walmart to play a direct role in spurring economic development in the communities we serve and reinforces our goal to spark collective climate action,” said Mark Vanderhelm, VP, energy and facilities management at Walmart.

Bentonville, Ark.-based Walmart operates more than 10,500 stores under 48 banners in 24 countries, and e-commerce websites, employing 2.2 million-plus associates worldwide. Walmart U.S. is No. 1 on The PG 100, Progressive Grocer’s 2021 list of the top food and consumables retailers in North America, while Walmart-owned Sam’s Club ranks No. 9 on the list.