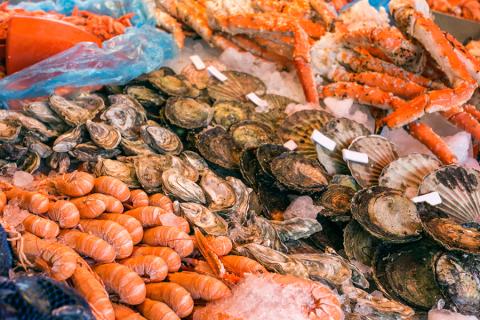 Shellfish for sale in a European market

The United States and the European Union (EU) are on course to resume trading raw molluscan shellfish products – clams, mussels, oysters and scallops, among other items – for the first time in almost eight years, according to the Food and Drug Administration.

In revealing the news, FDA Commissioner Scott Gottlieb, M.D., noted that “consumers have been missing out on choices in the marketplace, and businesses in both the U.S. and EU have missed opportunities for new commerce.”

Due to food safety concerns, U.S. shellfish imports haven’t been allowed to enter the EU by the European Commission (EC) since 2010, and FDA hasn’t permitted the import of live, fresh or fresh-frozen molluscan shellfish from the EU since the 1980s.

To enable the resumption of trade, “FDA has published a proposed determination that the safety controls in the EU are equivalent to those of the U.S.,” said Gottlieb. “In a separate but complementary action, the [European Community] is completing administrative procedures for its own proposed determination that U.S. safety controls are equivalent to those in the EU, a necessary step towards resuming trade.”

He added: “These critical determinations are a result of a multiyear, in-depth and cooperative review of shellfish safety systems in the U.S. and the EU, in which technical experts on both sides of the Atlantic have concluded that many of the safety controls in the EU and the U.S are equivalent. Both governments recommended these actions after reviewing existing food safety programs, safety measures for molluscan shellfish, and on-site audits to verify each other's systems.”

The moves undertaken by the two entities “will help to unlock economic opportunity for both U.S. and EU exporters by creating new market access as well as making a wider selection of healthy and safe shellfish options available to consumers,” explained Gottlieb.

The U.S. and the EU reached out to individual states and European countries to gauge their interest in taking part in the initial equivalence evaluation. If the determination becomes final, Massachusetts and Washington state will once again be able to send bivalve molluscan shellfish to the European market, while Spanish and Dutch shellfish exporters will be able to sell raw bivalve shellfish in the United States. “These states and countries are just the first, and we are committed to continuing to work with the EU on procedures to add more states and European countries,” observed Gottlieb.

The commissioner said he would release additional information “over the coming year about this proposed equivalence determination as we continue to work with the EU on the details for resuming mutually beneficial trade in this area. In the meantime, I’m committed to taking new approaches like this to maximize our shared resources and create greater efficiency in the trade of molluscan shellfish.”