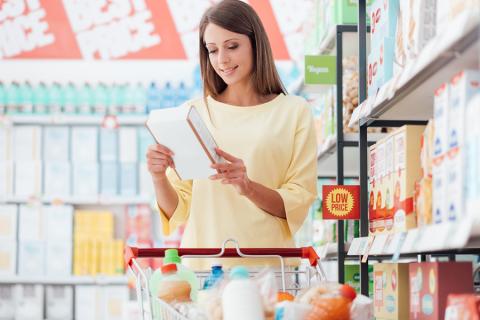 Grocery shoppers show loyalty to products that foster deeper relationships via information exchange, according to a new report from Label Insight and Food Marketing Institute (FMI). In fact, “The Transparency Imperative” discovered that 75 percent of shoppers are more likely to switch to a brand that provides more product information than what appears on the physical label. Asked the same question in 2016 in a similar Label Insight study, just 39 percent of shoppers said they would switch brands.

FMI, aided by Label Insight, developed the report to determine what transparency means to shoppers and how it influences their food retail purchases. “The Transparency Imperative” also probes attitudes and behaviors among health-conscious shoppers and those who are digitally engaged, and uncovers how consumers respond across generations. The report lays out the steps brands should consider to become more transparent: offer information beyond just ingredients, understand the specific needs of key shopper groups, meet the rising expectations of online shoppers, and monitor changing consumer preferences as this trend continues.

In the report, 86 percent of shoppers agreed that if food manufacturers or retailers permitted access to complete and understandable definitions for all of their ingredients, it would lead to greater trust. Almost as many shoppers (80 percent) said that they’re more likely to be loyal to a brand that offers more information than what’s on the physical label. More than half of shoppers (54 percent) said they were even willing to pay more for a product that provides more information.

“The new shopper mindset requires brand owners to think about their products well beyond the traditional label and respect a more digitally minded consumer,” said Doug Baker, VP, industry relations at Arlington, Va.-based FMI. “The study offers several considerations for how to make the best use of these findings, but overall, they require companies to recognize and communicate the importance of transparency and perform a thorough review of their unique consumer audiences and commerce channels.”

The vast majority of consumers – 69 percent – said it’s extremely important or important that brands and manufacturers provide detailed information such as what’s in their food and how it’s made. Online shoppers (80 percent), college graduates (76 percent) and higher grocery spenders – those who shell out $125-plus per week (75 percent) – were more likely to agree with this sentiment.

Asked to elaborate on what transparency means, older generations (Baby Boomers and Generation X) are more likely than Millennials to zero in on a complete list of ingredients, ingredient descriptions, and nutritional Information.  While Millennials also pay attention to these indicators, they’re more likely than older consumers to check allergen information, certifications and claims, explanations of ingredient usage, and other details such as animal welfare, Fair Trade and labor practices.

"We titled this report The Transparency Imperative’ because as we executed the research to bring the key findings of our 2016 studies current, we see clearly that transparency is only becoming more important to consumers,” explained Patrick Moorhead, chief marketing officer for Label Insight, which has offices in Chicago and St. Louis. “Their attitudes and preferences, particularly with the growth of ecommerce, make it clear that transparency is critical to growth, and our industry must take action.”

Almost half (47 percent) of American households include someone on a diet or following a health-related regimen. Such shoppers are even more likely to value transparency: 61 percent will pay more for products offering in-depth product information, compared with 54 percent of general shoppers. When a label isn’t enough, these health-focused shoppers (89 percent) are highly likely to get information elsewhere. Nearly half of this segment (47 percent) would be very likely to use a smartphone in-store to find more information than what’s on the label and the shelf.

The report further found that kids in the home raised the desire for transparency. Shoppers with children are more likely to place greater importance on ingredient information, nutrition and health benefits. They were also especially likely to find value in looking up detailed product information in-store on their smartphones (87 percent) and to use this method of information gathering (85 percent).

According to the report, 26 percent of shoppers bought groceries online in the past 30 days. This group is more educated, earns more money and is more likely to have children under 18. While Millennials shop online more than other demographic groups, they account for just 39 percent of such shoppers, with Gen X (30 percent) and Baby Boomers (23 percent) also making up a meaningful portion of internet shoppers.

The research featured in "The Tranparency Imperative" is based on an online survey conducted in May of a random sample of 2,022 U.S. grocery shoppers 18 years of age or older. FMI and Label Insight will provide deeper dives into the report in three complimentary webinars later this year.