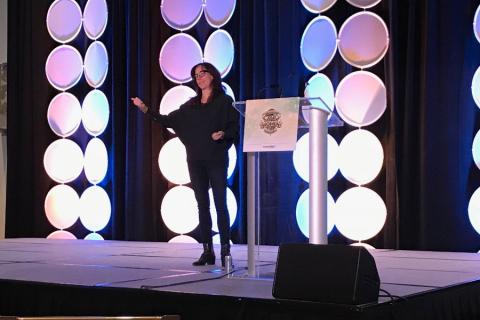 Amy Taylor, EVP/GM East for Red Bull, set the tone for the Leadership Development Program with her talk about being an authentic leader and how to build trust within your team.

Progressive Grocer’s Top Women in Grocery gala, which took place Nov. 8 and 9 in Rosemont, Ill., celebrated the great strides of women in the food industry, with 248 honorees accepting individual awards for the accomplishments in the industry. More than 500 attendees helped the winners celebrate their achievements as they mixed and mingled with colleagues, friends and family from around the country.

The event, hosted by Katie Brennan, SVP/group brand director at Progressive Grocer parent EnsembleIQ, and Katie Martin, senior editor of Progressive Grocer, took place at the Westin O’Hare and marked the Top Women in Grocery’s entry into its second decade of invaluable contributions women from all walks of the retail food industry in three categories – Senior-Level Executives, Rising Stars and Store Managers – with a dedicated daytime learning platform and evening gala awards celebration.

During the evening program, Lori Raya, president of Southwest of Albertsons, was presented with the 2017 Top Women in Grocery Trailblazer – which recognizes a single executive whose leadership, vision and influence have helped break new ground for women in the retail food industry – from Progressive Grocer, PepsiCo. and the Chicago-based Network of Executive Women (NEW).

At the gala, Kellogg’s Special K brand was saluted with the Top Women in Grocery Torchbearer Tribute, which recognizes a single company or brand that excels at building awareness of how women are portrayed in media. “Here’s what I liked about the campaign … it uses the idea that food is fuel and not to be used only as a ‘diet’ to create the body you can only imagine you have,” said Martin. “Food is what we need to be all that womanhood entails: worker, mother, enjoyer of life.”

In her message to this year’s class of Top Women in Grocery, who were selected from a field of more than 600 nominations, Martin noted, “While the road has been cleared for more equitable management teams, there is still much work to be done in paving that road and making it easier for those who will come up behind us. The Top Women in Grocery program has always celebrated growth in the industry, and in the coming decades, I hope this program expands and continues in the vein of celebrating everyone who has moved up through the ranks to become a top leader.”

More than 500 men and women attended the 2017 Top Women in Grocery gala, with 248 women being honored for their achievements.

Kicking off the Top Women in Grocery event was the Leadership Development Program, an educational platform designed to foster and enhance the success and professional development of its honored guests.

Amy Taylor, EVP/GM East for Red Bull, started off the program talking about authentic leadership, the unofficial theme of the program. Her talk about being your true self and being a little vulnerable in the workplace to help build trust among your team truly resonated with the attendees and was mentioned frequently throughout the rest of the event. Taylor practiced what she preached by opening herself up to the audience and truly driving home the importance of being yourself, letting others into what is happening in your life and demonstrating how doing that allows you to become a more effective leader.

Reagan Lund, director of corporate sponsorship, and Nancy Krawczyk, VP corporate partnerships and engagement, both from the Network of Executive Women (NEW) led the group in an interactive session about how to hone networking skills. By the end of the session, everyone was up and practicing their elevator pitch about who they are and what they can do.

The attendees then learned about how staying true to values can make a business success from Kelly Vlahakis-Hanks, president and CEO of Earth Friendly Products. She shared how the company not only practices sustainability with the cleaning products it makes, but also drives that effort home in how it treats its employees and encourages them to practice sustainability in their own lives.

The learning program was finished out with a panel of industry executives who shared their experiences in turning challenges into opportunities as well as advice for how to be an effective leader and diversifying your teams. The panelists were: Jessica Adelman, group VP corporate affairs for The Kroger Co.; Nancy Chagares, an industry executive; Deanna Jurgens, region VP of sales, Pacific Northwest for PepsiCo/Frito-Lay North America; and Barbara Van Dine, VP talent management for Smart & Final.