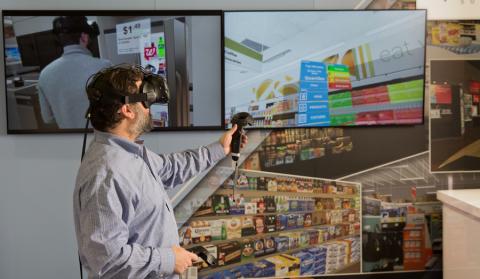 Although virtual reality (VR) technology in recent years often has been associated with consumer-facing entertainment – such as the novel and upcoming film “Ready Player One,” or the Playstation VR system – it’s finding growing potential to drive back-end efficiency in business, including brick-and-mortar grocery.

And while many believe VR is an idea to approach in the future, some see earlier adoption as a way to actually approach the future, today. Renowned grocery veteran Bob Mariano – who helmed Chicago-area grocer Dominick’s and Midwestern grocer Roundy’s, and now sits on the board of VR technology firm InContext Solutions – is one of those advocates.

Chicago-based InContext offers the ShopperMX flagship SaaS VR platform, through HIVE (Hi-Immersion Virtual Experience), which transports users via headset into a virtual store environment. This allows them to interact with products, shelf sets, store layouts and in-store displays to simulate in-store concepts “on the fly” and obtain data-driven insights on customer behavior by testing concepts and simulations with live shoppers using the technology. 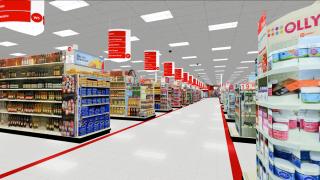 InContext Solutions' ShopperMX platform transports users into a virtual store environment, this one being a Target store.

The major barriers to adoption, however, are twofold: cost and unfamiliarity, which go hand in hand to create skepticism. But stories of major cost cuts can encourage jumping such hurdles, Mariano suggests. For instance, when working with its grocery partners for a new store layout, one manufacturer partnering with InContext sought to purchase 22,000 complex display cases. After testing them in VR, though, it found that customers reacted more favorably to a less expensive model, saving the firm $880,000.

To move into the future and see VR’s potential, grocers will have to “put their foot in the water and try it,” Mariano said. Because if VR reveals a way to cut costs, it could pay for itself.

“You don’t want to arbitrarily start cutting the tail and reducing facing – you’d like to do that in a rational and logical way with the customers at the center of what you’re trying to do,” he said. “I think it makes all the sense in the world, given today’s environment in retail, to do it far more scientifically than the old way we always did it.”

Because ultimately, Mariano warns, if grocers don’t embrace VR to rethink the path to purchase and consumer-centricity, they may never turn the tide of fading center-store sales.