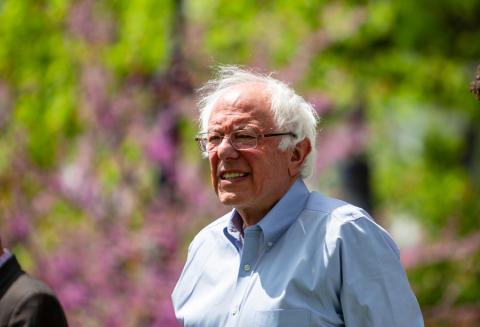 Along with Rep. Ro Khanna, D-Calif., Sen. Bernie Sanders, I, Vt., has introduced the Stop WALMART Act, which aims to get the company and others to up their minimum wage

Following their campaign to raise wages at Amazon, Sen. Bernie Sanders, I-Vt., and Rep. Ro Khanna, D-Calif., have unveiled legislation with the aim of raising wages at Walmart and other large corporations.

The Stop WALMART Act would prohibit large employers from buying back stock, as the mega-retailer plans to do, unless they do the following:

“While tens of thousands of Walmart workers are struggling to survive, Alice Walton had no problem amassing a private art collection worth half a billion dollars,” said Sanders, referring to the daughter of company founder Sam Walton. “Enough is enough. The time is long overdue for the Walton family to pay its workers a living wage. If large, profitable corporations like Amazon and Disney can pay all of their workers a minimum wage of at least $15 an hour, so can Walmart.”

“Walmart has refused to pay its workers a living wage, resulting in costs for taxpayers of $6.2 billion for basic necessities for survival, food stamps and housing assistance,” noted Khanna. “If Walmart can find $20 billion for stock buybacks to further enrich the Waltons, it can find the money to raise the pay of its workers to a living wage.  It’s time to put workers over wealthy corporation – across our nation, one company at a time. Today, I’m proud to join my friend Sen. Sanders in introducing the Stop Walmart Act to raise wages for Walmart workers.”

Last January, Bentonville, Ark.-based Walmart revealed it was raising the starting wage rate for all of its U.S. hourly associates to $11.

In the wake of the lawmakers’ earlier Stop BEZOS Act, named for Amazon founder and CEO Jeff Bezos, the Seattle-based e-retailer said it would raise its minimum wage to $15 for all full-time, part-time, temporary and seasonal U.S. employees, as well as advocate for a federal minimum-wage increase.

Walmart is No. 1 on Progressive Grocer’s 2018 Super 50 list of the top grocers in the United States, while Amazon is No. 8.