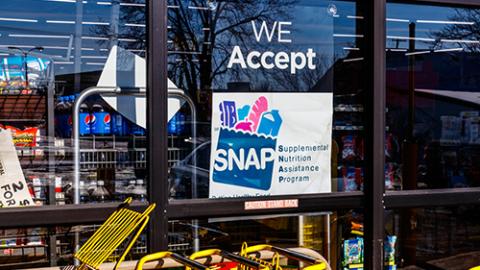 A retailer in Muncie, Ind., displays a sign that it accepts SNAP

The release of the draft text of the 2018 Farm Bill by the House of Representatives’ Agriculture Committee – the first step in its reauthorization – has retailers looking to see whether the existing Supplemental Nutrition Assistance Program (SNAP) that they support will remain in place.

The program was a key issue on the agenda during grocers’ recent “Day in Washington” Supermarket Industry Fly-in.

“America’s independent supermarket operators are an essential stakeholder in the federal government’s largest safety net program,” noted Peter Larkin, president and CEO of the Arlington, Va.-based National Grocers Association. “As the Farm Bill process plays out, we encourage members of Congress to preserve the strong public-private partnership between retailers and the federal government that has made [SNAP] a success by continuing to oppose new fees, reporting mandates or other costly administrative burdens on retailers. The Agriculture Committees have done a lot of initial work upfront, and we look forward to continuing to work with stakeholders in both the House and Senate to ensure the voice of the independent supermarket industry is represented.”

Meanwhile, a spokeswoman for Arlington-based Food Marketing Institute (FMI) told Progressive Grocer that the organization was in the midst of “reviewing and analyzing the details in the 641-page bill,” adding that FMI “will need to understand and analyze the impact of” such provisions as an enrollment database to reduce fraud; a retailer-funded pilot and food-insecurity nutrition incentive grants to motivate consumers to eat more healthfully; improving efficiency via a payments gateway; and improved privacy protections for both store-level and customer data, while attempting to provide more transparency on shopping patterns for items bought with SNAP benefits.

“While we understand the need to continue to ensure that consumers who actually need the benefit are receiving it, we also know that dramatic changes to requirements for SNAP like work requirements or assets tests can have far-reaching economic impact,” the spokeswoman observed, going on to note that FMI would “work with the House Agriculture Committee to ensure that changes impacting retailers and our customers are done in a way that results in improvements without negative economic impact.”

Still, there seems to be considerable trepidation concerning the legislation in the retailer community, with Seeking Alpha reporting that an analyst from Washington, D.C.-based Height Capital Markets has cautioned that many in the industry may be disappointed by it.

“The bill would reduce overall SNAP benefit spending by imposing new work requirements on beneficiaries,” wrote Stefanie Miller, who believes that the Senate probably won’t agree on a bill with the same level of restrictions.

The farm bill currently in effect will expire on Sept. 30.

Another Look at Labels

In other legislative news, the Food Labeling Modernization Act, a bill introduced by Sens. Richard Blumenthal, D-Conn., Sheldon Whitehouse, D-R.I., and Ed Markey, D-Mass., as a companion to legislation introduced in the House by Reps. Frank Pallone Jr., D-N.J., and Rosa DeLauro, D-Conn., is being viewed with similar caution by the grocery industry.

“We look forward to reviewing the specifics of the Food Labeling Modernization Act of 2018,” the Washington-based Grocery Manufacturers Association told PG. “Our industry is committed to providing consumers with the information they need to achieve and maintain a healthy lifestyle. Through our Facts Up Front front-of-pack labels and the SmartLabel ingredient information initiative, consumers now have easier access to more ingredient information than ever before.”

For its part, the Center for Science in the Public Interest, also based in the nation’s capital, contends that the bill “represents a much-needed overhaul of food labeling regulation,” as it would “[establish] a single, standard, front-of-package nutrition-labeling system to clearly distinguish between healthy and unhealthy foods,” in addition to requiring companies that make ingredient claims to list the percentages; creating clear and consistent standards for marketing terms like “natural”; providing such information to consumers as caffeine content and sesame allergen labeling; requiring, for the first time, “structure/function” claims like “helps build strong bones” to be reviewed by the Food and Drug Administration, as is currently required for health claims like “prevents osteoporosis” and adding a requirement for listing phosphorus, a nutrient that can have adverse health effects on those with chronic kidney disease.