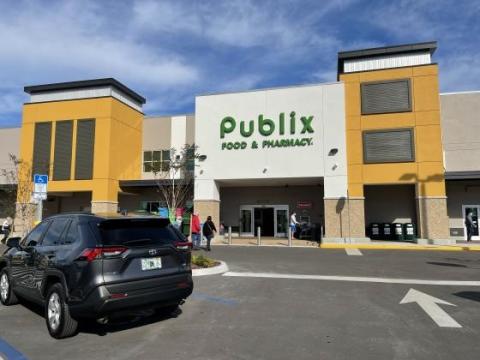 Proceeds from sales of Publix-branded reusable bags are used to support sustainability projects throughout the grocer's operating area.

For the fourth year in a row, Publix has donated $125,000 to the Arbor Day Foundation to plant 125,000 trees in two damaged Florida watersheds: the Withlacoochee River Watershed and Little Orange Creek Preserve.

The donation brings the five-year total to over $600,000 donated to plant 605,000 trees, funded entirely by proceeds from the sale of Publix-branded reusable bags.

According to the Arbor Day Foundation, the trees planted in the past five years are estimated to intercept more than 66 billion gallons of rainfall and absorb more than 182,000 metric tons of net carbon dioxide over the next 50 years.

“Over the course of four years, Publix has demonstrated how a continued commitment to tree planting can benefit an entire region in the long-term, creating thriving environments for people and wildlife,” said Dan Lambe, president of the Arbor Day Foundation. “We are grateful for their continued partnership and its immense impact on Florida’s watersheds.”

Nutrient pollution in Little Orange Creek, one of the many impaired waterways in the Ocklawaha River watershed, has led to oxygen depletion and aquatic habitat smothering.

Withlacoochee State Forest is facing the impacts of land misuse dating as far back as the 1800s. Tree planting efforts are underway to convert the area to its natural ecosystem. This project will support watershed health as well as restore ecosystems for wildlife including gopher tortoises, Sherman’s fox squirrels, red-cockaded woodpeckers and bobwhite quails.

Proceeds from sales of Publix-branded reusable bags are used to support sustainability projects throughout the grocer's operating area.

Privately owned and operated by its more than 225,000 employees, Lakeland, Florida-based Publix has 1,268 stores in Florida, Georgia, Alabama, Tennessee, South Carolina, North Carolina and Virginia. The grocer opened a new store concept in Tampa, Florida, in December. It recently reported sales for its fourth quarter of $11.2 billion, a 14.8% increase from $9.8 billion in 2019. The company is No. 12 on The PG 100, Progressive Grocer’s 2020 list of the top food and consumables retailers in North America.