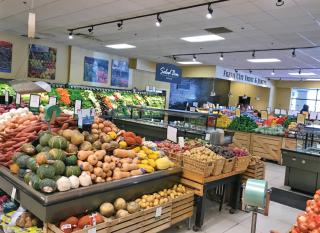 In a competitive market like Chicago, quality becomes important, and Treasure Island takes that challenge to heart in its produce departments.

“Quality is No. 1 on our priority list,” asserts Bob Zenawick, VP of operations. “We have three buyers that go to the market for us on a daily basis. They work seven days a week trying to procure only the best of quality at the best price possible.” The majority of the produce is purchased at Chicago’s Water Street Market, “so it’s as local as it can get,” he adds.

Depending on the time of year, the grocer also sources some product directly from local farmers. Most are able to supply all seven Treasure Island stores, to keep the selection the same.

Aside from quality, one of the biggest trends in Treasure Island’s produce departments is convenience. Customers are looking for pre-cut, pre-washed and pre-trimmed products,

Zenawick notes: “Everybody is leaning to that now, regardless of the generation, because everybody’s time-starved.”

The fruits and vegetables are cut on a daily basis at the company’s Montrose store, but when the newest location opens next summer, it will feature an on-site produce butcher, so customers can select what items they want cut and how they want them cut when they want them cut.

Treasure Island is committed to produce — it’s the largest category in the stores in terms of square footage, with at least 1,000 SKUs available at any time. The departments also feature salad bars, and certain stores have two salad bars to accommodate the influx of customers.

The departments also do a lot of business in healthy beverages like smoothies, juices, chai and infused water, all of which are prepared on-site at the stores. A variety of fruits are cut up and placed in bottles of water, with varieties like strawberry, kiwi, blueberry, lemon, lime and orange.

“Customers can’t get enough of them, especially in the warmer months; in the spring and summer, it flies,” Zenawick notes. “Our roots and our foundation are built on the produce department, and that’s something we take a lot of pride in.”