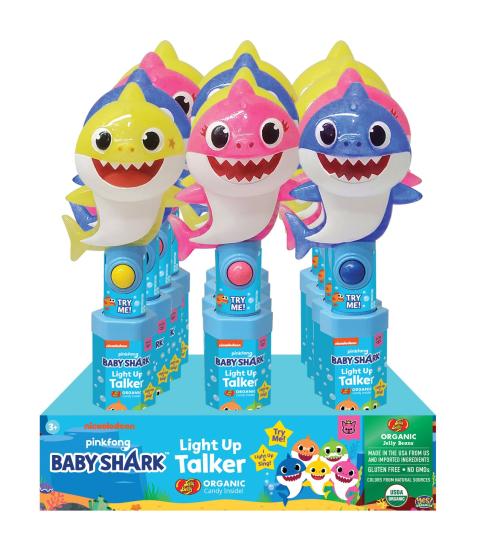 If all else fails, remember to order more Baby Shark candy.

For food retailers looking to drive maximum sales and profits in candy during the fall and winter holidays, two words should be at the forefront of buying decisions: Baby Shark.

Those are the addictive, dopamine-stimulating lyrics to the viral hit song “Baby Shark,” which took the internet by storm in 2016, yet is still capturing the attention of American families, especially in the candy category.

During an interview at the Sweets and Snacks Expo in Indianapolis in June, Clark Taylor, SVP sales and marketing of Louisville, Ky.-based CandyRific, said that his company can’t make enough Baby Shark novelties and candy products.

“Some of our customers are selling 10,000 of these a week in their stores,” noted Clark, who said that his Baby Shark spinning-fan candy toys come in a variety of flavors, styles and better-for-you options for the younger consumer who’s reading labels. “Some of the dispensers have organic Jelly Belly jelly beans, because we know this younger parent, consumer, is looking for Baby Shark candy, but better-for-you Baby Shark candy.”

Baby Shark remains the most watched YouTube video ever, with more than 9 billion views. The animated television series has also been a hit, and now there’s an original animated film coming from Nickelodeon and set for release possibly in 2023.

The Baby Shark trend is just one reason that Halloween, Christmas and the spring holidays may bring food retailers sweeter candy sales than ever. After more than a year of lockdowns and restrictions, the American consumer is ready to celebrate, and candy is poised to be a major part of what are predicted to be supersized gatherings. In addition, the U.S. economy has reopened, shoppers still have stimulus money and savings from the pandemic to spend, and store traffic has rebounded, restoring some unplanned purchasing opportunities.

Even though food retailers are navigating a storm of challenges this fall — a COVID resurgence, higher costs, product shortages and trucking delays – they have a sweet sales opportunity in candy. But buyers need to focus on two key areas: remembering that the major holidays fall on weekends this year, virtually guaranteeing big traffic numbers, and getting the assortment right for each holiday early (think Baby Shark, unicorns and Marvel superheroes). 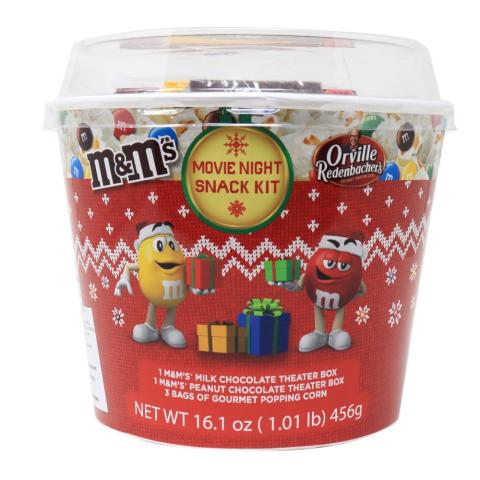 CandyRific also teamed up with Mars this year to offer four seasonal Movie Night Snack Kits created to appeal to consumers choosing to Netflix and chill at home.

Thirty-four percent of consumers intend to start holiday shopping by Labor Day, according to a survey by San Francisco-based digital experience management software company Sitecore. In addition, two in three consumers (64%) expect the upcoming holiday season to be more meaningful than in years prior, making Americans 56% more likely to be emotionally invested in the 2021 holidays. And nearly two in three (62%) Americans plan to spend more than they had before the pandemic, according to a survey on 2021 holiday shopping behaviors from Colorado Springs, Colo-based product design firm Quantum Metric.

Looking immediately ahead, Halloween promises to be a blockbuster selling occasion, not that last year was bad. In fact, candy sales were up last year during Halloween, according to Todd Scott, manager, corporate brand and editorial at the Pennsylvania-based Hershey Co.

“We started to see trends that people were going to celebrate Halloween, whether or not it was a traditional trick-or-treat experience,” Scott recounts, “and we went to our retail partners and said, ‘Look, you don’t want to pull back on Halloween just yet, because what we’re seeing is that people are going to want to preserve their traditions. They may look a little bit different than they did before, but they're still going to do it.’ It ended up being a good Halloween.”

According to Scott, the company has adapted its Halloween strategy when it comes to marketing and supply chain to meet the needs of the post-pandemic consumer. One method that the company employed last year was placing Halloween candy offerings on shelves weeks in advance, which the company is doing again this year.

“We don’t treat Halloween as a one-day holiday; Halloween is a 10-week season because people shop early, they go out, they get their Halloween candy, they bring it home, they eat it, they have to go get more,” Scott explains. “So we understood where consumers were last year and how they were feeling about the holiday itself; getting out a little bit early, and then treating it as this longer season, I think, was what really helped.”

Another Hershey strategy was to update product mixes and sell smaller-sized bags to meet increased demand for both at-home and out-of-home occasions. This year, Scott says, Hershey is expecting a “really positive” Halloween.

“One, we had success last year, and two, Halloween falls on a weekend this year, so it’s going to be a weekend of celebration rather than a single night around the country,” he observes. “So I think you’re going to see more people party.”

Manufacturers such as Hackettstown, N.J.-based Mars Wrigley have also embraced omnichannel initiatives to build bigger baskets as consumers navigate a shifting pandemic environment where they might feel like shopping in-store one day because the pandemic is “over,” but may want to avoid the store the next day due to news about another COVID surge. 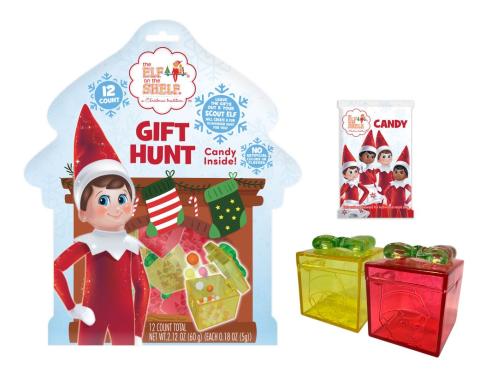 CandyRific has rolled out new items for Christmas, including The Elf on the Shelf Gift Hunt bag (SRP, $7.99), which includes 12 plastic presents with removable lids.

“Last year, there was a lot of ambiguity about Halloween, so we launched our Treat Town app, which was the No. 2 app last Halloween,” says Tim Lebel, president of sales at Mars Wrigley. The free Treat Town app allowed users to connect with friends and family and visit U.S. attractions, all from the comfort of their own homes. Users could also purchase virtual candy credits for their favorite Mars Wrigley brands to give out to trick-or-treaters in their network via their virtual doors. Trick-or-treaters could then go “door to door” visiting friends and family across the country, and collecting Mars Wrigley candy credits that could be exchanged for real candy online or in store at national retailers.

“People are ready to get back to their gatherings, and for us, Halloween is about connecting and celebrating the date,” Lebel says.

Manufacturers also see opportunities in the Christmas and spring 2022 holidays for candy-focused celebrations.

“Oh, we’re forecasting growth,” asserts Marcus Combs, director of grocery and value channels at Des Plaines, Ill.-based Haribo of America Inc. “At the largest grocery retailer right now, we’re up 30% this year for Halloween alone, and that’s a sharing holiday. We did really well last Valentine’s Day, which is usually a chocolate holiday. We are attaching our brand to certain occasions, and it’s translating. We are growing double digits on every season, so now we have the challenge of, what do we come up with next? The revenue is really big; we’re excited.”

Hershey, Mars Wrigley, Haribo and CandyRific have all been busy during the pandemic, launching innovative products designed to appeal to the holiday candy shopper. For instance, CandyRific teamed up with Mars this year to offer four seasonal Movie Night Snack Kits designed to appeal to pandemic-wary consumers choosing to Netflix and chill at home instead of going out. Each bucket is filled with one M&M’s Milk Chocolate Theater Box of candy, one M&M’s Peanut Chocolate Theater Box of candy, and three bags of gourmet popcorn. The buckets come in Halloween, Christmas, Valentine’s Day and Easter themes. The suggested retail price for each Movie Night Snack Kit is $10.99.

CandyRific has also rolled out new items for Christmas, including the Elf on the Shelf Gift Hunt bag (SRP, $7.99), which includes 12 plastic presents with removable lids. Each present comes with a bag of assorted fruit-flavored dextrose candies with natural flavors and colors. The small presents are designed to add surprise and delight to the fun of hunting and seeking The Elf on the Shelf Scout Elves each day. The company will also offer the Elf on the Shelf candy dishes, snow globes and candy fans.

As for spring holiday opportunities, suppliers at the Sweets and Snacks Expo exhibited unicorns and Marvel superheroes-adorned heart-shaped boxes of chocolate for Valentine’s Day and Easter baskets. But CandyRific’s Clark predicted that Baby Shark will likely still rule into 2022, if he can get enough computer chips to manufacture enough product.

“We are 150 days out on orders, due to shipping delays and shortages — those are our biggest challenges,” he said. 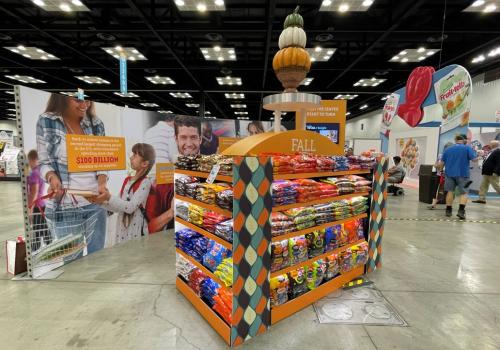 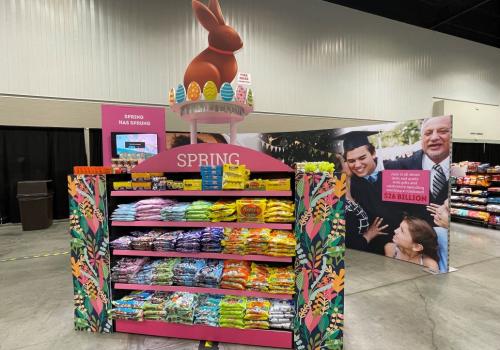 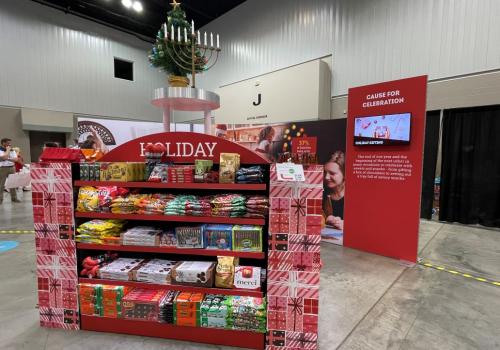 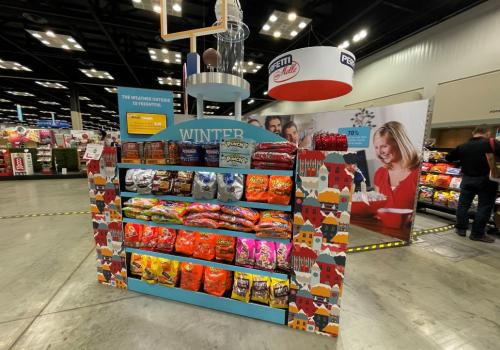