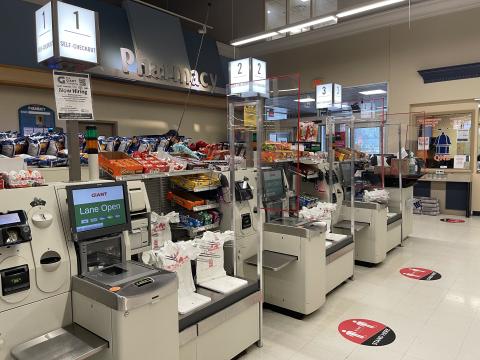 More than one in five adults anticipate they will be using self-checkout (23%), according to the survey.

A new survey from Verizon and Morning Consult give the clearest picture yet of what U.S. consumer behavior will be like after the pandemic.

The study leverages Verizon network data to suggest permanent lifestyle changes in the workplace, a sustained larger appetite for streamed content, a comeback for phone calls, and a more equal mix of online and in-person shopping as the new norm.

“The pandemic has forced all of us to face challenges we never considered,” says Kyle Malady, chief technical officer at Verizon. “A year into the pandemic, data usage on Verizon networks remains at almost 31% above pre-pandemic levels, a clear indicator that internet consumption and the acceleration of technology adoption are major byproducts of this moment. We’ve seen the shift to digital jump ahead 5-7 years.”

While online, contactless payments and non-traditional shopping experiences were not born of the pandemic, the last year has expanded Americans' familiarity and use of them. Most adults say they were shopping mostly in person pre-pandemic (60%), while just over a third say the same now (37%). Adults surveyed anticipate that a year from now, they will be shopping in person and online equally (42%).

About one in three adults say they either used or heard about contactless credit cards (36%), contactless mobile payments (33%), and grocery delivery services (38%) for the first time during the coronavirus pandemic. More than one in five adults anticipate they will be using self-checkout (23%), contactless credit cards (24%), and contactless mobile payments (22%) more a year from now than they are now. Only 16% expect they’ll be shopping mostly online a year from today, a 6-point increase from before the pandemic, and an 8-point drop from today.

As companies shifted from in-office to work-from-home, many have invested significant resources into technology to ensure the continued operations of their business. Survey data suggests that many employees who have acclimated to remote work are not in a rush to go back to an office full-time. In fact, half agree that they would consider changing jobs to continue remote or hybrid work. This may have lasting effects on food retailers located in urban areas with lots of office towers.

Use of collaboration tools like video conferencing on Verizon’s networks is still a remarkable 2,872% above pre-pandemic levels. Traffic across secure networks (VPN) also remains 91% higher than pre-pandemic volumes. Over half of employed adults say they are currently working remotely at least part of the time (54%), nearly twice the share who say they were doing so before the pandemic began (28%).

Among those who’ve worked at least partially remotely at some point in the last year, about seven in 10 say they would like to be working remotely at least one to two days per week a year from now (69%). Just one in four hope to return to in person work full-time (25%). Remote workers largely say they tend to be more mobile when they’re working remotely (75%). Two in three say they plan to take advantage of remote work to travel or work from places other than their home when the pandemic has subsided (67%).

About two in three U.S. adults say that recently they have been spending at least three hours per week watching live TV (67%). More than half (59%) say the same about watching content through a streaming service. Nearly half of adults (47%) say they have subscribed to a new streaming service since the start of the pandemic. Most say they have binge watched shows at least once or twice (70%). While there is no final verdict on American’s preference to “binge watch” versus watch episodic content, Gen Z prefers to binge (47%). Most U.S. adult households currently subscribe to a cable or satellite television service (62%). Nearly one in four say they’ve cut the cord (23%). Among Millennials, one in five say they have never subscribed to a cable or satellite television service (21%).

Mobile gaming really took off during the pandemic. Forty-six percent of respondents report that they have purchased or downloaded a mobile game at least once since the pandemic started; while 36% report doing the same for a computer or console game.

Nearly a third of respondents said that they spend 3 or more hours a week playing games on their mobile devices (31%). About a third of adults who’ve spent time online gaming (32%) and talking to friends or family via video calls (32%) say they were spending more time doing these activities in the early months of the pandemic than they are now, while nearly half say they were spending about the same amount of time as they are now (45% and 46%, respectively).

Newer technology may get the headlines about record data usage, but the old fashioned telephone call spiked during and after lockdowns. As the pandemic first took hold, Verizon network data showed phone calls increase by 20% as people were connecting more over the phone than in person. That percentage has remained steady with current phone calls coming in at almost 19% above pre-pandemic times. Today the duration of those calls also remains significantly higher, with people talking almost 29% longer on calls.

Nearly one in three adults say they either upgraded or considered upgrading both their home internet bandwidth (32%) and their mobile data plan (32%) within the last year. Younger generations and those who are working remotely are more likely to say so compared to their counterparts.

Among adults who use messaging apps, video calls and social media to communicate, nearly one in three anticipate they will be using each respective form of communication more a year from now than they are now.

The strongest increase in reported usage from before the pandemic to during the pandemic is observed for video calls (21% to 26% for friends; 25% to 31% for immediate family).

Verizon commissioned this poll conducted by Morning Consult on March 12 to March 14, 2021 among a national sample of 3,000 adults in the United States. The interviews were conducted online and the data was weighted to approximate a target sample of adults based on gender, educational attainment, age, race and region.