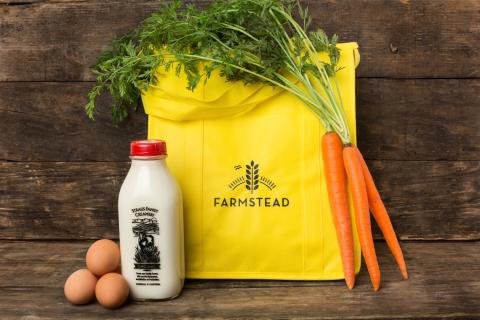 The San Francisco-based company announced Wednesday that it has raised an additional $7.9 million. This brings Farmstead’s total funding to date to $14.5 million.

Farmstead is known for leveraging proprietary AI technology and a dark store model -- delivery-centric warehouses that serve a 50-mile radius, delivering many thousands of orders per day -- to maximize efficiency and reduce costs. The company is growing quickly, with plans to expand nationwide to a primarily mid-market audience.

“The Farmstead team worked hard in 2020 to perfect the dark store model and the underlying proprietary technology that makes Farmstead so incredibly efficient,” said Pradeep Elankumaran, co-founder and CEO of Farmstead. “We are laser focused on expanding Farmstead’s national brand, and adding more partnerships with grocery chains, helping them increase their daily delivery capacity while driving long sought-after profitability with each order. This industry has been stagnant for long enough - customers demand change and we are building the foundation for sustained e-commerce growth in grocery while exceeding their expectations.”

Also in October, Farmstead hired Sara Custer as its head of operations. Custer brings more than a quarter-century of logistics experience to her latest role, with previous senior operations positions at various grocery delivery companies.

Before coming to Farmstead, Custer was VP of operations at San Francisco-based Imperfect Foods where she helped lead the opening of five new facilities nationwide, raising the company’s availability to more than 75% of the United States while maintaining metrics and costs. Under her guidance, Imperfect Foods increased its headcount from 45 to 1100-plus and expanded its SKU offering from 65 to more than 250.

Prior to that, she was SVP of operations at San Francisco-based GrubMarket, and also held senior roles at Munchery, LivBlends, Blue Apron and Whole Foods Market.

In her new position, Custer will oversee operations, expansion and customer satisfaction, as well as working closely with accounting, finance, and HR to manage Farmstead’s massive growth.

“I joined Farmstead because it is such an important company in this uncertain time,” said Custer. “We provide a much-needed service that allows consumers to get all their groceries delivered right to their doorstep. The trajectory for online grocery is rising sharply, and Farmstead’s platform is both exciting and ever-evolving; it is a one-of-a-kind company. The core team is a group of incredibly bright folks who push the boundaries every day, and I am really excited to join them during such an important time in the company’s history.”