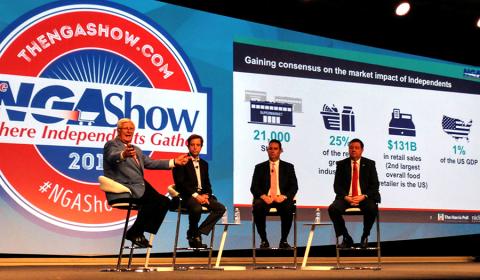 The National Grocers Association (NGA), which represents the independent supermarket industry, released findings from the third annual National Grocery Shoppers Survey, conducted by Nielsen on behalf of NGA. Released during the NGA Show in Las Vegas, the survey gauges consumer attitudes and behaviors from both The Harris Poll consumer panel and Nielsen’s panel-based Independent Grocer Shopping database, a subset of the Nielsen Homescan panel.

This year’s survey found that two-thirds (64 percent) of independent shoppers are very/extremely satisfied with their local supermarket, with more than 80 percent of shoppers preferring their local store to an online option. Further, they strongly associate independent grocers with friendly associates, superior meats and produce, and easy-to-navigate layouts.

“There’s no doubt that the supermarket industry is rapidly changing, either because of the growth of ecommerce or the explosion of new formats, along with shifting consumer trends,” said Peter Larkin, president and CEO of Arlington, Va.-based NGA. “However, independent grocers are nimble enough to quickly overcome obstacles, and with strong ties to their communities, they know what consumers want and need.”

“In today’s omnichannel retail environment, independent grocers maintain a unique and strong connection with their shoppers,” noted Jeanne Danubio, EVP of retail lead markets at Chicago-based Nielsen.“Complementing the findings of this year’s survey, Nielsen’s new independent buyer group panel data shows that a loyal independent grocery shopper spends more than 40 percent more in grocery than the average shopper. It will be critical for independent grocers to maintain the quality and personal connections that keep these valuable consumers coming back to the independent store.”

Among the key findings of this year’s research:

As mentioned, more than 80 percent of shoppers prefer their local store to an online alternative, and those who do grocery shop online, do it as well as shopping in a physical store (68 percent), with the majority of their purchases (75 percent) done at the store. Convenience is the chief reason consumers shop online for groceries, while the desire to see items before buying them and concerns about freshness are the biggest obstacles to online shopping.

While a small group of shoppers (11 percent) shop online, food delivery is their preferred method of shopping. More than three quarters (76 percent) of shoppers who’ve bought groceries online have used food delivery, versus 39 percent who’ve used click-and-collect. The most commonly purchased items are packaged foods (14 percent), followed by general merchandise/health and beauty care (10 percent) and cleaning products (10 percent). Almost three in 10 (27 percent) shoppers said that they expect to increase their online grocery shopping over the next five years.

Help with health and wellness

The majority of independent shoppers (63 percent) anticipate assistance from their grocery stores in pursuing a healthier lifestyle. Among the most popular ways they suggested for doing that were instructions on how to cook with certain foods (28 percent); help with reading labels, including ingredients and nutritional claims (25 percent); and general guidance on food that gives good nutritional value for the dollar (23 percent). Shoppers were almost split on how healthy foods should be merchandised, with 58 percent saying that healthy food alternatives should be integrated with other food items, compared with the 42 percent who said that healthy foods should be in their own dedicated section.

What works, what doesn’t

When deciding where to shop for groceries, independent shoppers value low prices, quality meats and produce, friendly staff, cleanliness, and locally grown produce and other packaged goods. Almost seven in 10 shoppers (67 percent) have no plans to switch from their independent store. Meanwhile, survey respondents noted that independent supermarket operators need to enhance their website usability by providing consistent pricing online and offline, the same products online and in-store, and a user-friendly smartphone app.

The National Survey of Grocery Shoppers was conducted online by The Harris Poll on behalf of NGA among 3,008 U.S. adults age 18 and older between Nov. 13 and Dec. 8, 2017, using a sample from The Harris Poll Panel who self-identified as independent shoppers. Additional analytics came from Nielsen’s panel-based Independent Grocer shopper database of 44,000 consumers. Loyal independent shoppers are defined as those who spend 50 percent or more of their reported shopping at an independent grocery store.