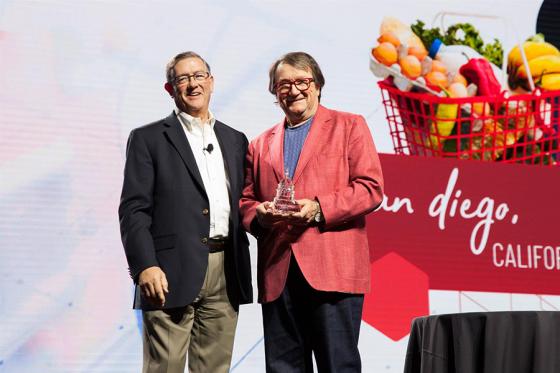 Jan Gee, president of the Olympia-based Washington Food Industry Association (WFIA), received the Woman of the Year Award from the Women Grocers of America (WGA). Named a Top Woman in Grocery by Progressive Grocer in 2018, Gee has spent more than three decades as a voice of small businesses, focusing on the independent grocery industry for the past 10 years.

“Through her leadership and tireless efforts, Jan has been a strong advocate for the independent supermarket industry at every step of the way,” noted Peter Larkin, president and CEO of Arlington, Va.-based NGA. “She has played a key role as a mentor for women in the industry, inspiring and encouraging many to take on leadership positions.”

“Rudy is a tireless advocate of the independent supermarket industry by supporting a public policy agenda that benefits Main Street grocers throughout the country,” said Greg Ferrara, NGA’s EVP of advocacy, public relations and member services. “NGA commends Rudy on his achievements and looks forward to working together in the future as we continue come up with innovative ways to advance the interests of our industry.”

The award’s namesake, Clarence Adamy, was a past president of the National Association of Food Chains who was active in public and government affairs from the 1950s through the 1970s.

Retailer operates 8 supermarkets, among other businesses