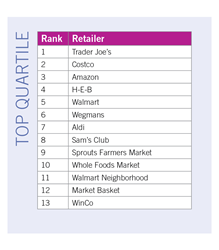 “Our model captures the complexity of customers’ preferences and their actual choices by quantifying the relationship between how they perceive a retailer with their emotional connection and the financial performance,” Gomes noted.

Summing up the results, Gomes said: “We firmly believe that retailers must differentiate themselves today to be competitive in face of the myriad of options shoppers have. Differentiation begins with the retailer identifying the shoppers that they can serve better than their competition. A solid customer-first strategy, backed by customer data science, will help the retailer focus its finite resources and attention on the customers that are the most important to their success. This study is intended as a first step on that path of understanding.”

Other key findings from the study include:

Dunnhumby’s Retailer Preference Index is available on the company's website.