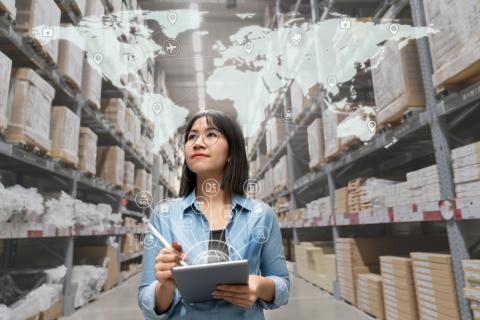 The Consumer Brands Association is calling on the government to take steps to add more resiliency to the supply chain.

Those across the nation’s supply chain breathed a sigh of relief earlier this month when the U.S. Congress flexed its legislative muscle to avert a potentially crippling rail strike. That said, there are plenty of other reasons for concern following a steady stream of circumstances and events impacting the flow of goods.

“The economy didn’t need a rail strike and consumers certainly would have felt the impact of that. We appreciate Congress’s intervention and their ability to take action is a good thing. But there is still a lot on the table and a consistent trend of going from crisis to crisis to crisis,” Tom Madrecki, VP of supply chain and logistics for the Arlington, Va.-based Consumer Brands Association (CBA), told Progressive Grocer. “The question is, how do you actually strengthen the supply chain and build resiliency long term?”

That’s a big question that the association, manufacturers and retailers must address, along with those in government, he added. “As we look to Congress in the new year, we see a number of opportunities for Congress and the Administration to play a more active role,” Madrecki declared, citing several important topics that are still in limbo.

He pointed to supply chain resiliency provisions that were part of legislation pertaining to competitiveness with China. “That got off the rails a bit. The legislation that passed was more focused the semiconductor industry and there was a lot of agreement on the need to provide funding for supply chain mapping and performance analysis. You can’t fix what you don’t understand,” Madrecki pointed out.

Another meaningful bit of legislation with a ripple effect in the supply chain is the proposal to increase truck weights, which would allow companies to move products more efficiently across the country. “Historically, that’s been a challenge, but as you move more product with fewer trucks, that also plays into sustainability commitment. It’s some low-hanging fruit (legislatively),” he noted.

The CBA has also urged lawmakers to address labor issues that are hampering supply chain efficiencies. “Immigration can be a thorny issue but now there is a clear need for more workplace personnel. It could be something similar to the seasonal visa for ag workers  – the manufacturing operations that ramp up during production are part and parcel of that, too. Are there are ways to do such visas seasonally or to be more targeted to strengthen and stabilize employment?” Madrecki said.

One quick action that CBA has advocated is the reduction of tariffs. “We are in an inflationary environment and one of the simplest and cleanest ways to give money back and take cost out of manufacturing is to reduce or eliminate trade tariffs,” he explained, noting that cuts and reductions can be taken at different scales.

Other issues are top of mind as 2023 approaches, such as the need to shore up railroad infrastructure and passing budgets that fund important entities like the Department of Transportation’s new office of intermodal freight. “Overall, the sense of urgency has to be maintained. Events keep happening on a more frequent basis, which reinforces the need for proactive measures that build resiliency. Private sectors are taking approaches to build supply chain resilience and the same holds true for government. It has to be a leading priority," Madrecki declared.