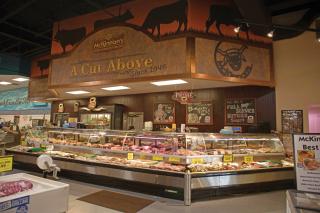 When you claim to be home of the super butcher shop, you’re setting the bar pretty high, but McKinnon’s Supermarkets follows through on the claim. One Yelp reviewer exclaims that the Salem, N.H., store (the company operates four stores total — two in New Hampshire and two in Massachusetts) has three aisles of meat.

“We pride ourselves on having the biggest selection in New England,” says co-owner Ed Penta. “It’s very important to us. Meat is center of plate, and it’s a good percentage of our business.”

McKinnon’s stores feature large meat displays. The Portsmouth store, for example, has a 240-foot meat case, and while the choices abound for customers, including Certified Angus Beef, it’s the staff that keeps them coming back, according to Penta.

“We have extensive knowledge” when it comes to meat, he says, adding: “We have real meat cutters on staff. Real meat cutting and knowing how to cut from the carcass down to the plate.”

The two New Hampshire stores, which are larger in square footage, have service meat counters that allow customers to get the exact cut they want, although about 80 percent of sales come from the self-service cases. Portsmouth has 20 employees in the department alone.

Some of the department’s best-sellers include sirloin tips, sirloin flat meat and marinated chicken. (The marinade is so popular that McKinnon’s now bottles it and sells it separately.) Penta sees a lot of growth potential in oven-ready products like the marinated chicken.