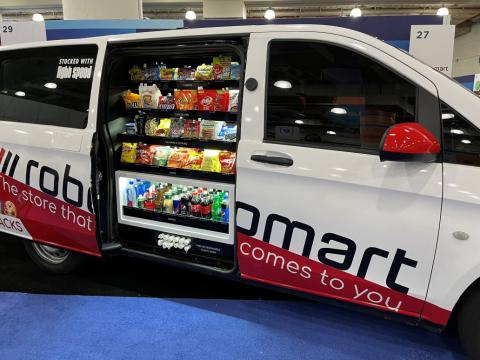 Robomart was among the groundbreaking tech vendors featured in the Innovation Lab at NRF 2022: Retail’s Big Show.

For my inaugural Ahead of What’s Next column — in case you haven’t heard, its previous writer now has more pressing duties as Progressive Grocer’s editor-in-chief — I decided to write about my recent trip to the National Retail Federation’s NRF 2022: Retail’s Big Show, the annual retail technology trade event that I had somehow never attended before, despite living in its longtime venue of New York City (I know, I know!) So, undaunted by the rapidly spreading Omicron variant of COVID-19 and bone-chilling January temperatures, I ventured forth.

One interesting aspect of the show that I hadn’t been aware of before was that in addition to participation from the likes of Target CEO Brian Cornell and Walmart U.S. President and CEO (and now also NRF Board of Directors Chair) John Furner, there’s an Innovation Lab highlighting “carefully curated companies that are solving today’s biggest challenges for retailers,” according to NRF. Among the areas of specialization covered by the Innovation Lab’s 55-plus vendors at this year’s show are e-commerce, sustainability, supply chain, data analytics, customer experience and product discovery.

Learnings From the Lab

It was in the Innovation Lab that I encountered Yawye, a company pioneering zero-question market research, described by co-founder and CEO Danny Socolof as “a brand-new way to measure how people are feeling, using the language of emoji and existing brand content.” When it comes to gleaning actionable insights into a brand, “empathy is the new intelligence,” Socolof asserted.

Another fascinating new solution was CoolR, an artificial intelligence-based platform to monitor refrigerated and ambient shelves, which has already sold 11,000 of its Vista units — capable of detecting out-of-stocks, planogram noncompliance, foreign product contamination and pricing inaccuracies, all by SKU — to “the world’s largest ice cream company,” resulting in a staggering 65% sales increase at said business, according to CoolR Group CEO Roy Mehta. The solution is also used by companies such as Target, The Coca-Cola Co. and PepsiCo.

I also caught up with Robomart, an e-commerce service that enables consumers to shop for necessities by “hailing” a mobile store via app; when the vehicle pulls up at the curb in front of their house, the consumer opens the vehicle door using the app and then selects their desired items in a contactless, frictionless manner. The company’s fleets of snack and pharmacy vehicles are currently deployed, with grocery, café (deli) and ice cream versions up next, and a fast-food offering due by the end of the year. CEO and co-founder Ali Ahmed noted how the service is seeing great repeat business in West Hollywood, Calif., where it’s currently available, with consumers hailing the vehicles 2.3 times a week.

The service is also set to expand: Ahmed told me that the vehicles would soon be making their way across Los Angeles, with plans to launch on the East Coast as well. (For more about Robomart, as well as about key trends that I observed at NRF 2022: Retail’s Big Show, click here.)

Of course, the vendors I encountered at the Innovation Lab represent just a smattering of the many original solutions highlighted by NRF at its retail tech spectacular, and I was very glad to get a closer look at some of them — better late than never.