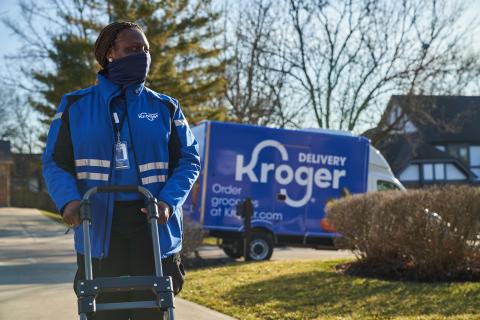 Each CFC will employ roughly 400 people, many of whom will be delivery drivers whose starting wage will be $18.45 an hour.

Remember where you were in mid-April 2021 because it promises to be a seminal moment in the evolution of food retailing.

On April 14, Kroger officially announced that its first two automated customer fulfillment centers had begun operations, setting the stage for a period of disruption and market share gains reminiscent of Walmart’s entry into food retailing in the 1980s. As was the case then, Kroger’s efforts are not being fully appreciated for their long-term potential, even though the company has provided compelling operational metrics and sale forecasts.

Kroger expects its e-commerce grocery sales to double by the end of 2023, following a 116% increase last year that resulted in e-commerce sales of $10 billion. Contributing to that growth was a 150% increase in delivery, a figure that is expected to surge in 2021 after it began shipping orders this month from 375,000-sq.-ft. CFCs near Cincinnati, Ohio, and Orlando, Florida, developed in partnership with U.K. retailer Ocado.

“It really is a huge and monumental day in Kroger’s history and in the grocery industry overall,” said Rodney McMullen, Kroger’s chairman and CEO, referencing the opening of the facilities during a video call with members of the media on April 14. He described the openings of the CFCs, the first of 11 planned openings during the next 24 months, as the next stage of creating a seamless food retailing ecosystem that positions Kroger as an e-commerce leader.

“During Kroger’s 138-year history we have continually transformed the company numerous times and this is one more evolution,” McMullen said.

What’s different this time is the creation of an expansive, technologically advanced grocery e-commerce infrastructure that is expected to transform Kroger’s business model and reset shoppers’ expectations in a way that will set new competitive benchmarks for other retailers. A key reason why is what Kroger and Ocado executives regard as the superior economics of the network of large CFCs fulfilling online grocer orders as opposed to pickers in stores. The latter was never an optimal process designed from scratch, and as any grocer who relies on that method of fulfillment will attest, it is a costly approach fraught with challenges.

As Luke Jensen, CEO of Ocado Solutions, explained, the Kroger and Ocado combination will yield the best value, freshness and service for shoppers.

“The ecosystem that we are creating together with Kroger in the U.S., anchored around CFCs, combined with smaller facilities, with in-store fulfillment will deliver the lowest cost to serve and the best customer service in the market,” Jensen said.

A key element of the service experience involves orders that arrive at customers' homes on time and in full. That’s a phrase typically used by supply chain executives to describe truckloads of goods shipped to stores, but it has taken on new meaning in the digital grocery world amid the pandemic due to out of stocks and pickers making frequent substitutions to online orders. The CFCs are expected to remedy that situation due to the concentration of inventory in a centralized location, resulting in higher levels of satisfaction.

As Kroger executives previously shared with investors, each CFC is expected to fulfill the sales volume of roughly 20 stores. Special delivery vehicles equipped with frozen, chilled and ambient zone are capable of making 20 deliveries per trip and drivers will be paid a starting hourly wage of $18.45. In a market like Florida, where Kroger doesn’t have any stores, but surveys show it has a high degree of favorable name recognition, it will rely on a hub and spoke approach. That gives it the ability to serve the entire state along with Southern Georgia and Alabama from a single location. While the profitably of any single location will be determined by volume, McMullen provided general guidance and also contrasted Kroger’s approach with the micro-fulfillment strategy that has been more broadly adopted by grocers.

“We would expect a CFC to break even after three years and in year four the margins of that facility will be similar or a little bit better than a physical store,” McMullen said. “When you look at micro-fulfillment centers, we would expect those to not be the same level of profitability.”

However, McMullen and other executives frequently invoked the word “ecosystem” to describe the company’s approach, leaving the door open for the development of smaller, or different types of facilities, over time.

“We would expect that we will have smaller CFCs and larger CFCs and obviously the backbone of all that is our supply chain and our stores. I don’t think you can look at one piece of the puzzle. It is all the pieces together,” McMullen said.

Kroger has already leaned in that direction. The CFCs that were first in the company’s development pipeline such as Monroe, Groveland, Atlanta and Dallas, are all larger than 300,000 square feet. However, the square footage of more recently announced facilities planned for Romulus, Michigan and Phoenix are 135,000 and 200,000, respectively.