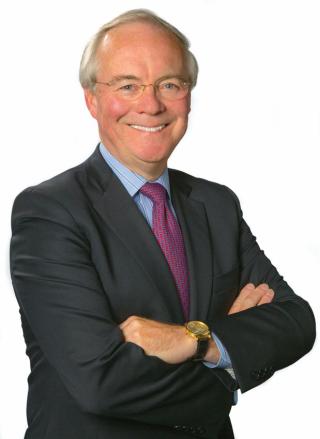 “Leading with fresh and accelerating with digital” is a phrase that the food retailing industry will be hearing a lot from The Kroger Co. this year and beyond. It’s a simple message that works equally well when communicating with investors or associates to describe how Kroger is thinking about its potential to grow and gain market share in an industry that it values at $1.4 trillion.

It’s not like the company is deficient in fresh or digital. Quite the opposite: Sales of fresh products, which Kroger defines as consisting primarily of produce, floral, meat, seafood, deli, bakery and fresh prepared, increased 13.6% last year to nearly $33.5 billion, representing 27.4% of the company’s merchandise sales, excluding fuel.

As for digital, thanks to an aggressive rollout of grocery pickup in 2018 and 2019 as part of its Restock initiative, Kroger was well prepared when the pandemic hit and shoppers wanted to avoid coming into stores. The availability of pickup service at more than 2,200 stores enabled the company’s digital sales to double in 2020 to exceed $10 billion. Additionally, thanks to a 20-year-old loyalty program with strong engagement, Kroger was able to serve 500 billion personalized offers to digitally engaged shoppers and generate $150 million in incremental operating profit from its retail media group, Kroger Precision Marketing (KPM).

“Leveraging Kroger’s unique strengths in fresh food, combined with our increasingly profitable digital business, creates an unmatched combination that positions us better than anyone to continue to win share in a highly fragmented $1.4 trillion market,” noted Kroger Chairman and CEO Rodney McMullen on how the company is thinking about the future, during an annual investors conference on March 31. “Today, we have a 10% share of food at home, with No. 1 or No. 2 market share positions in the vast majority of the major markets in which we operate, which makes the opportunity for growth ahead of us incredibly exciting.” 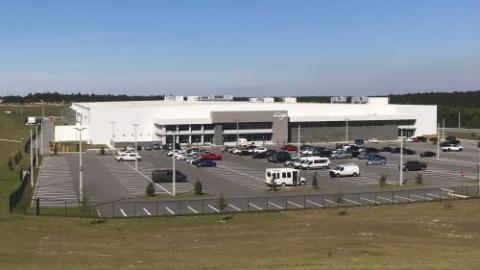 The Source Of Excitement

The most significant development of the past two decades in food retailing is beginning to unfold, and Kroger is at the center of it. The company’s digital sales last year doubled to more than $10 billion, and by the end of 2023, Kroger CIO Yael Cosset, speaking at the same investors conference, said that digital sales are forecast to double.

If that target is achieved, a key reason will be the result of a strategy Cosset, McMullen and other Kroger leaders revealed in early 2018. That’s when the company committed to an unprecedented deal with online grocer Ocado to open as many as 20 robotic customer fulfillment centers (CFCs). Few retailers in the United States were familiar with the United Kingdom-based company prior to the deal with Kroger, but now the U.S. food retailing world could be turned on its head as Kroger’s new CFCs become operational over the next two years.

To date, specific details on the location of eight facilities and their sizes have been revealed, with approximate details provided for two others. Collectively, these facilities encompass roughly 3 million square feet, and each is capable of fulfilling online orders equivalent to the sales volume of 20 stores, but with only 60% of the capital and labor required. The first new facility, in Kroger’s hometown of Cincinnati, became operational in March, and a second facility, near Orlando, Fla., went live in April.

The combination of a growing network of CFCs, blended with a store base of more than 2,700 locations, is setting up Kroger to be a more disruptive force than it already is in the markets where it operates, as well as new ones. For example, according to Gabriel Arreaga, the grocer’s SVP of supply chain, 45% of the U.S. population is within reach of a Kroger store, most within a few miles, but that situation will change.

“We’re rolling out our new CFCs, which will enable even more customers to access more products even faster and in more markets,” Arreaga says. “Our customer fulfillment centers will create an opportunity to serve 75% of the U.S. population within a 90-mile radius.”

This is where Kroger’s approach to digital grocery differs from other retailers that have opted for a micro-fulfillment approach, with smaller automated facilities adjacent to stores or integrated into existing footprints by repurposing space.

“In my experience leading supply chains in different economies and geographies, reach matters in creating an ecosystem that captures rapid market share and lowers operational cost aggressively,” Arreaga explains. “That is why we invest in CFCs that cover a vast population with one single building, versus other competitors that invest in hundreds of facilities. We will scale faster.”

In addition to CFCs, Kroger is counting on Ocado’s technological sophistication in other ways. The companies expanded their relationship last fall to leverage Ocado’s in-store fulfilment (ISF) capabilities, which include proprietary software that supports employees’ efforts to assemble orders by making it easier and more efficient to find products when fulfilling pickup orders. 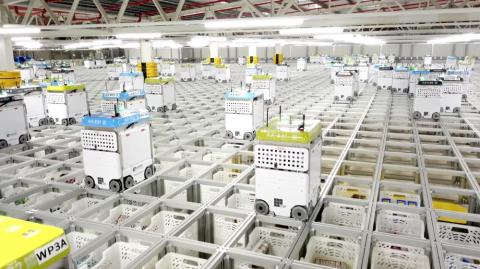 Hundreds of robotic pickers inside Kroger's CFCs enable the massive facilities to fulfill the same volume of roughly 20 stores with 60% less labor.

As Kroger scales its unique grocery e-commerce approach in the next several years, it expects to be in the right place at the right time to capitalize on trends that will endure after the pandemic. The growth of e-commerce, cooking at home and prepared meals to go are all areas that benefited from the shift to spending more time at home and eating less at restaurants. Those trends will endure, according to McMullen, and drive company results — it just won’t appear so in the near term.

Following dramatic growth last year, which resulted in full-year identical-sales growth of 14.1%, Kroger has cautioned analysts that identical-store sales this year could decline between 3% and 5%. That’s why the company is encouraging investors to look at sales on a two-year stacked basis to even out the huge deviation in performance caused by the pandemic.

“Building upon the foundation established by our Restock Kroger transformation, and leveraging key learnings from operating during the pandemic, our strategy of leading with fresh and accelerating with digital is designed to convert our industry’s near-term tailwinds into long-term competitive advantages,” McMullen says. 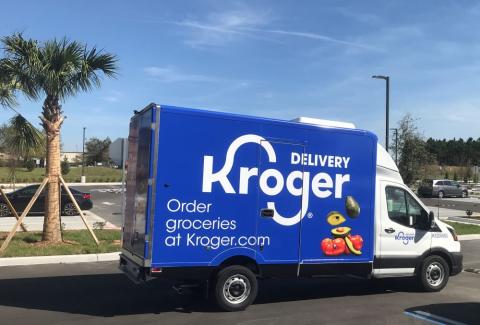 Kroger's CFCs will rely on a fleet of purpose-built vehicles to deliver orders within a 90-miles radius.

Leading with fresh and accelerating with digital to deliver a seamless shopping experience made for a good headline following Kroger’s meeting with investors. However, as the company begins to put more meat on the bones of how it expects to achieve total shareholder returns of 8% to 11%, two other key areas stand out as having an impact on Kroger suppliers.

The company is intent on growing its Our Brands business, which already consists of 15,000 items that generated sales last year of $26.2 billion. One of its newer brands, Simple Truth, launched only five years ago, recently surpassed $3 billion in annual sales. The company’s next billion-dollar brand, according to Stuart Aitken, Kroger’s chief merchandising and marketing officer, will be Home Chef. Acquired in June 2018 for $197 million, the meal solutions brand saw a sales increase last year of 118%, according to Kroger.

Our Brands are a major competitive advantage for Kroger, but as the retailer continues to expand their presence, it creates new competitive pressures for branded suppliers. While this dynamic has existed since the advent of private brands, Kroger is elevating the pressure on brands while it also gives them powerful new tools to engage more effectively with shoppers.

KPM is a retail media platform that’s best in class in the industry and also part of a major trend of changing how brands connect with shoppers. Led by SVP Cara Pratt, KPM is helping brands capitalize on the shift to digital purchase behaviors while also serving as a meaningful new alternative revenue stream.

“Media mix investment follows consumer behavior, and e-commerce is in the early stages, particularly grocery and particularly in the United States, of an upward trajectory,” Pratt says. “Brands want to get closer to influence purchase, and recognizing that more than ever, consumers are making decisions in a digitally constrained shelf.”

Pratt notes that 85% of the top 500 keyword searches on Kroger’s site are for unbranded search terms, making the case that the retailer has become Google-like in its role as a search vehicle.

“There is an incredible change happening in the media ad tech landscape and, frankly, the entire media supply chain,” she observes.

Privacy regulations and changes to the use of third-party data sources make the use of first-party data such as Kroger’s more valuable, because of the direction connection it affords shoppers.

“Now more than ever, it is critically important to leverage Kroger as the No. 1 digital grocery destination, as measured by Comscore, to allow brands to drive food inspiration, and ultimately bring more performance to the media supply chain,” Pratt says.

Power of the Platform

One trend in the retail industry is that retailers increasingly refer to themselves as “platforms,” as opposed to retailers. Doing so helps convey a broader set of capabilities that are intertwined and mutually reinforcing to create a flywheel effect of accelerating growth. That’s the situation at Kroger, whose platform is seen as positioning the company well to win in a post-COVID world.

“Our four competitive moats of seamless, personalization, fresh and Our Brands are stronger today than ever before, reinforcing our confidence in our ability to grow sales and market share,” McMullen affirms.

As the company executes strategies in each of those areas, it’s looking at the size of the market share prize differently from some others. Kroger considers the market it serves to be valued at $1.4 trillion, because it believes in a share-of-stomach point of view. McMullen introduced that concept when the original Restock Kroger plan was introduced three years ago. In essence, Kroger competes with anyone that offers food to consumers, including foodservice operators satisfying meal occasions that could be served by Kroger.