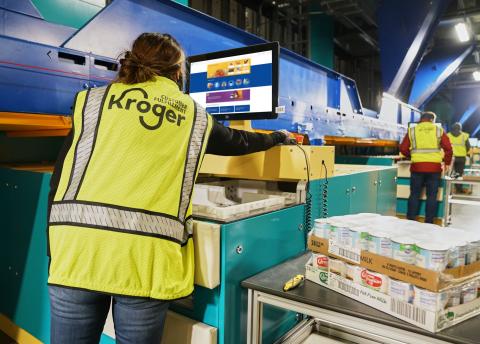 A worker at Kroger's newest customer fulfillment center in Groveland, Fla., prepares merchandise for loading into a section of the facility called the hive where products are available for robotic picking.

Senior executives from The Kroger Co., gathered northwest of Orlando, Fla., on July 29, for the grand opening of the retailer's newest robotic fulfillment center, and shared key performance detail's during a behind-the-scenes look at the 375,000-sq.-ft. facility.

Key among the revelations Kroger CEO Rodney McMullen shared with Progressive Grocer during an exclusive interview is that the facility, which became operational in March, is exceeding the company's expectations, generating high net promoter scores, and repeat purchase rates. The positive performance is impressive considering prior to the opening of the customer fulfillment center Kroger did not have a physical presence in Florida.

At full capacity, the facility, which Kroger refers to as a shed, will generate sales revenues equivalent to 20 to 25 stores, McMullen said. The service area currently extends through the center of Florida to the greater Tampa Bay area in the west all the way to the east coast from Jacksonville to Daytona. Prior to the shed’s opening, Kroger’s physical presence in Florida was limited to a single store in the far northeastern corner of the state.

“For years and years, we’ve tried to figure out ways to come to Florida,” McMullen said. “One of the things that is an advantage for us is about half of the people that live in Florida are from somewhere that Kroger serves. The comment that we would always get is when are you coming to Florida.”

The new shed is part of a grocery ecosystem that, according to McMullen, will help the company double its existing $10 billion online business by 2023.

The shed sits at the center of a hub and spoke model with distribution nodes present in the Tampa and Jacksonville markets, which Arreaga said are performing very well.

"What's so exciting about this, is that this is the future," Stuart Aitken, Kroger's chief merchant and marketing officer, told a gathering of roughly 100 local officials at the grand opening. “When Floridians think about food, we want them to think Kroger, and this is truly a unique way to deliver the freshest food to our customers. When that van shows up at your doorstep it is an incredible experience. We are providing a solution that you haven't seen before."

The reason no one has seen it before is because the technology, the infrastructure, the workflows inside the shed, and even the delivery vehicles had to be built from scratch to deliver an e-commerce experience unlike anything else. 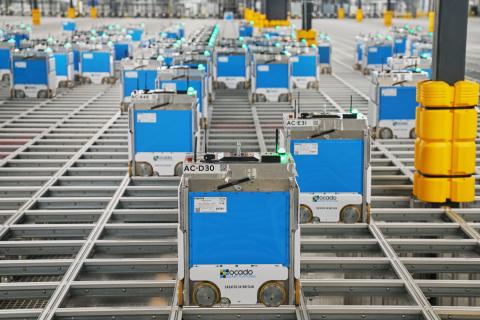 More than 1,000 robotic picking units ferry totes filled with merchandise inside a structure called the hive.

Kroger's new facility is a three-level marvel of e-commerce and supply chain sophistication powered by technology from Kroger's U.K. partner Ocado. The ground floor contains receiving and sortation processes specially created for robotic picking. For example, merchandise arrives at 21 inbound receiving bays, half of which are dedicated to ambient products and the other half for chilled.

Pallets of products then flow to work stations along a conveyor belt for a process called decanting. Cases of products have to be opened by workers in a manual process and individual products, also known as eaches, are placed into totes for placement into the large vertical and horizontal storage area called the hive. The shed contains multiple modules with multiple pick stations per module.

Once the hive is populated with products, the robotic retrieval devices, which move swiftly within 5 millimeters of one another on a grid located on the third level, are able to fetch individual items to place in totes that can hold three orders apiece.

A system of color coded totes helps keep everything organized. The totes holding products in the hive are white. Red totes capable of holding three bags sit inside of white totes that robots move throughout the hive to retrieve orders. Other totes are colored green for produce, yellow for meat, and blue for frozen products.

Once orders are filled, they are loaded on to specially designed delivery vans with three zones for ambient, frozen and chilled. The shed has 15 bays for delivery vans and drivers are aided by a proprietary system that helps optimize order delivery routes.

Orders destined for west coast or east coast markets are loaded on trailers at one of 12 bays. Those shipments are then offloaded at the spoke facilities in Tampa and Jacksonville and placed on delivery vans. As Kroger looks to extend operations into heavily populated areas in South Florida it will require hub facilities in those markets as well. The timing of such a move hasn't been disclosed.

"You have to earn your right to expand," McMullen said. "Right now we're focused on the Orlando area, Jacksonville and Tampa. Over time we have a facility here that has the capacity to do a lot more."

Kroger will be expanding to other markets with its sheds in the next 18 months with Atlanta the most likely next location followed by Dallas, according to McMullen.

“Between late this year and next year there are seven facilities that should open," McMullen said.

Atlanta is a well-established market for Kroger so the approach to operations and marketing there will be more similar to the approach taken when Kroger opened its shed in Cincinnati a few weeks before the Florida opening.

“One of the things we are learning in Cincinnati is how do you leverage both the shed and the stores, because we do find a meaningful number of customers who find pickup just as handy as delivery," McMullen said.

Ultimately, Kroger is agnostic about the fulfillment method as it is building a new type of grocery supply chain to execute a seamless customer experience.

“Supply chain in the future is going to be so much different than supply chain in the past. Every facility will end up becoming a distribution point and it will be significantly more complicated,” McMullen said. “The thing you have to remember about Kroger is half of our volume is fresh and fresh is a lot more complicated to be able to pull that off. I think complicated is fun. It is fun to be part of a team that hasn’t been done before. No one wants to just keep doing what’s been done."

Cincinnati-based Kroger employs nearly half a million associates who serve 11 million-plus customers daily through a digital shopping experience and almost 2,800 retail food stores under a variety of banner names. The company is No. 3 on The PG 100, Progressive Grocer’s 2021 list of the top food and consumables retailers in North America.